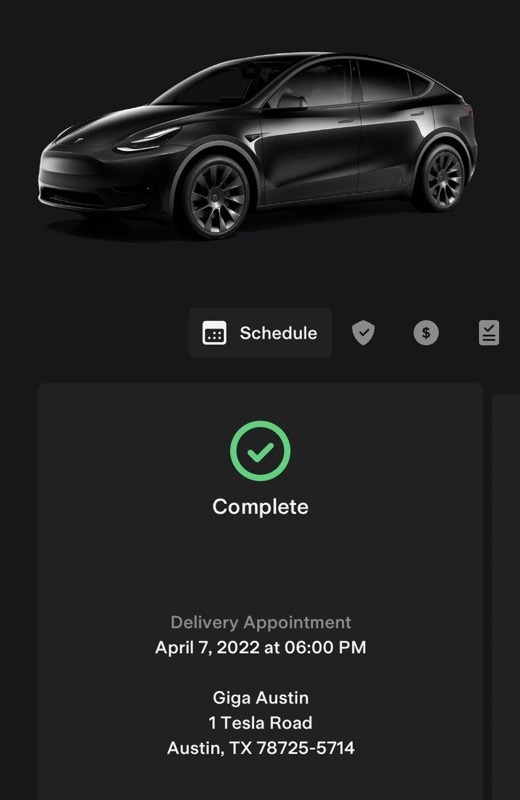 On the eve of Tesla’s Cyber Rodeo at its new Gigafactory in Austin, Texas, it appears the company will celebrate the grand opening with deliveries of the first Model Y vehicles at the event.

According to Jordan (@TesLaw22), he shared a screenshot showing an April 7, 2022, Model Y delivery appointment, at Giga Austin, located at 1 Tesla Road, set for 6pm (Cyber Rodeo starts at 4pm). The Model Y in the screenshot is a Long Range all-wheel drive car in black, with upgraded 20-inch Induction wheels.

“So excited to be taking delivery of an Austin-made Model Y at the #CyberRodeo tomorrow!”, said Jordon on Wednesday evening. The first Model Y vehicles from Giga Texas will have Tesla’s latest 4680 structural battery pack.

Currently, it’s not possible to purchase a Tesla directly from the company in Texas due to franchise laws. Tesla needs to have cars shipped to other states for processing and delivery to those service centers first. It’s possible that Tesla did that based on earlier images of Model Y vehicles departing Giga Texas, and now they have returned for the Cyber Rodeo event.

Tesla currently is prepping the Giga Texas site, which has its Cybertruck and Semi on location (along with Roadster), according to recent drone flyovers of the site.

As you can see in the video below shared by @Teslaconomics, the Cybertruck is on site and driving around at Giga Texas.

The stage and lights are currently being set up inside giga texas! pic.twitter.com/eVramf0KNy

Interesting new lighting on the walls of Giga Texas pic.twitter.com/fTlHsmp4FS

According to images and video shared by Zack (@BLKMDL3) just now, Tesla is preparing the stages on site and various lights as well.

Tesla reported record Q4 2022 earnings today and the automaker also provided an update on its upcoming Cybertruck. According to Tesla, it says “Cybertruck remains on track to begin production later this year at Gigafactory Texas. Our next generation vehicle platform is under development, with additional details to be shared at Investor Day (March 1st, […]
Sarah Lee-Jones
2 days ago