Tesla CEO Elon Musk has been a good hype man for his electric vehicle (EVs) company Tesla, and the opening of a new factory in Germany has him celebrating once again.

Tesla and Musk oversaw the initial delivery of 30 Grünheide-built vehicles from its new Gigafactory Berlin-Brandenburg on Tuesday, according to Reuters.

@Tesla_Adri also shared a series of videos from the initial deliveries, including the very first delivery of the day and others throughout which people are clapping and celebrating to loud music playing through the speakers.

First car of the line!! pic.twitter.com/SYXEovRP4S

During the event, many also spotted Musk dancing and acting excited to blaring music as the deliveries occurred. Musk famously danced at the opening of Giga Shanghai. No striptease this time, however. 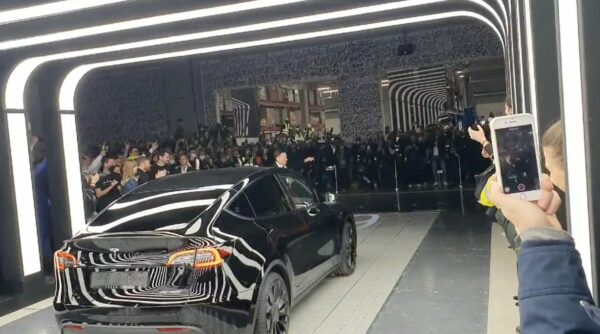 At the event, Musk said, “This is a great day for the factory.” Musk continued, saying the facility’s opening was “another step in the direction of a sustainable future.”

The deliveries come just a few weeks after Tesla officially gained final approval for the Gigafactory in Brandenburg, following months of delays caused by a combination of regulatory needs and environmental criticisms.

The Tesla factory is equipped with a state-of-the-art paint shop, which is set to produce some new colors for the automaker.

You can see Musk’s full speech from the event in the video below.

Tesla Model Y units in the company’s new “Quicksilver” color have started making their way to showrooms across Europe, just a few weeks after the first units with the new paint option were spotted outside Gigafactory Berlin-Brandenburg. Electric vehicle (EV) enthusiast Lasse Edvardsen (@nasalahe) on Saturday shared images of a Quicksilver Model Y Performance on […]
Nehal Malik
10 hours ago

Tesla has debuted a 2023 Model Y All-Wheel Drive, in existing inventory for immediate purchase in select states. Currently, Tesla’s website no longer offers the Standard Range for purchase, as only Long Range (delivering Dec 2022 to March 2023) and Performance are available. The Standard Range Model Y AWD was made at Gigafactory Texas with […]
Sarah Lee-Jones
14 hours ago