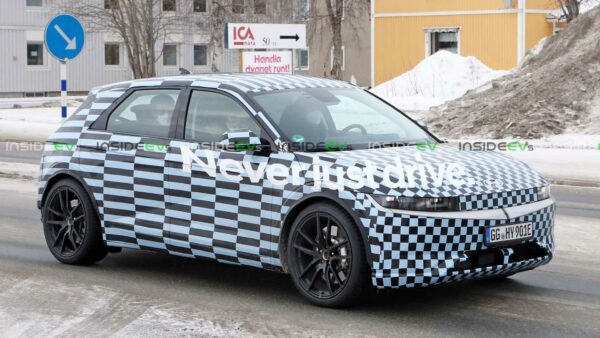 South Korean automaker Hyundai will use their “N” badge —reserved for the performance variants of their mainstream models— on their novel EV lineup.

Sporting a checkered camouflage and a “Never Just Drive” slogan, the Ioniq 5 N is similar in appearance to the standard model revealed globally in February 2021. Exterior-wise, the apparent changes seem to be summed up by fender flare extensions to fit the car’s wider wheels and bigger lower intakes in the frontal bumper.

However, the lightweight wheels wrapped in low-profile tires, larger front discs, and a reduced ride height suggest engineers have speedier aspirations. We could speculate this performance model will feature a sport-tuned suspension and electronic limited-slip differential software similar to that of the Kia EV6 GT.

The Ioniq 5 is a compact crossover SUV, the first car to be marketed under Hyundai’s EV “Ioniq” sub-brand.

The car was praised for its spacious interior, suspension, and lightning-fast charging times. When plugged into a 50 kW charger, the Ioniq 5 goes from 10 to 80 percent in just 61 minutes, while taking 17 minutes on a 350 kW charger, beating Tesla’s Model 3 in both measurements.

Earlier today, Hyundai announced it would be launching 23 battery-electric cars by 2030, as the company continues to invest in EVs.