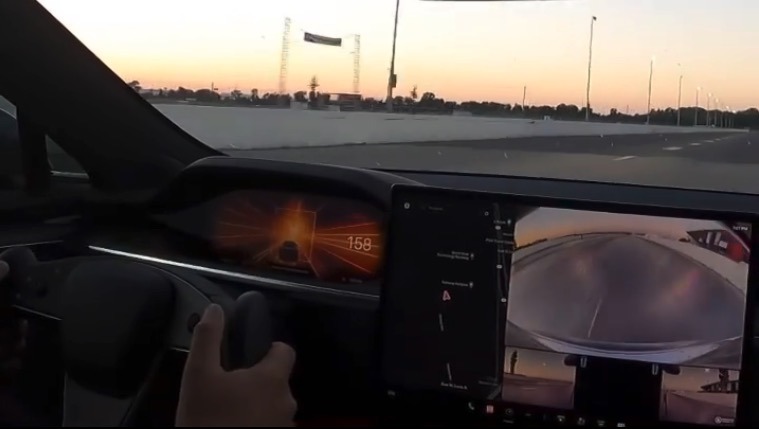 Update Feb. 8, 2022: According to George Doddworth, the husband of Christine Doddworth below, he is casting heavy doubts on this unofficial speed run. Chalk this up as something that didn’t happen as explained by situation_coyote, whose Instagram has since been deleted.

Model S Plaid owner ‘situation_coyote’ shared a video of their run on a drag strip, from a run back in August.

“Knocking off a 8.94 with a lot of weight taken off the car,” said situation_coyote on Monday morning. “Still factory 21 inch tires and factory wheels. We actually shredded the rear factory tires from so many passes. These stock tires fail from the inside. Car is too heavy for the tires, the owner said.

“After beating on it for 11k miles I sold the car, I did what I wanted with it. Wonder who owns a [world record] Plaid and doesn’t even know,” said ‘situation_coyote’, then sharing a video of their record run and also the slip time of 8.94 seconds at 156 mph.

Check out the record Model S Plaid 1/4 mile run below:

Elon Musk reacted to the run shared by @BLKMDL3 with an emphatic, “nice!” on Monday.

This isn’t the first time we’ve seen a Model S Plaid hit an 8-second 1/4 mile time. Back in November, Christine Dodworth ran an 8.99 second 1/4 at 155 mph, at Maryland International Raceway, in a Model S Plaid that looked like it similarly had weight reduced to make the record run.