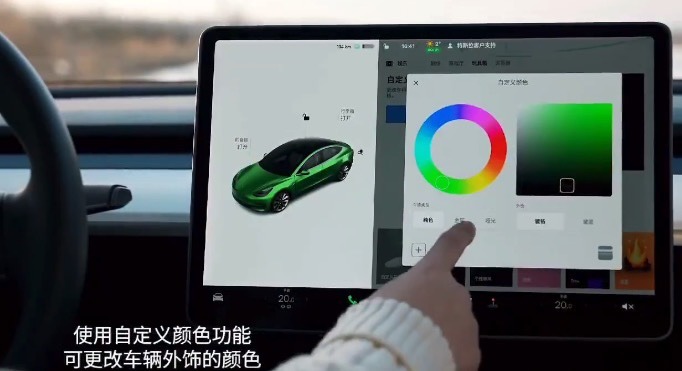 Earlier today it was revealed Tesla is set to launch its 2022.2.1 Lunar New Year software update in China, which offers a new feature that lets you customize the color of your car and more.

@Teslascope shared a video this evening showcasing how the new custom car color feature works. The video looks to be from Tesla China itself.

Under Toybox, there’s a new tab for the custom car color feature. From here, you just select the color you wish and the Tesla shown in your display will reflect your choice. With version 4.5.0 of Tesla’s mobile app, your custom color choice will automatically sync to your phone.

Here is an exclusive first glimpse of the new color feature!

We're pleased to share that the colorized vehicle render will also display within your Tesla mobile app. 📱🚗 pic.twitter.com/bEjhSB0nhx

According to @Tesla_App_iOS, version 4.5.0 of the Tesla app in the U.S. contains the “underlying code that allows” the functionality, suggesting the feature will eventually make its way outside of China and to United States.

Update: Here’s a better video shared by Tesla China, which we’ve shared to YouTube so you can watch it below:

After Tesla stepping up its hiring efforts in Thailand earlier this year caused some to expect an upcoming launch in the country, the automaker has officially announced plans to start selling cars there. In a post on LinkedIn, Tesla shared a photo with text in Thai translating to “Hello Thailand,” and saying “See you December […]
Peter McGuthrie
9 hours ago