These particular Model Y bodies lacked a lower floor, suggesting they were made to house Tesla’s new 4680 structural battery packs.

Now, we’re seeing a reference to Tesla’s 4680 structural battery pack, as found in its Model Y user manual updated for software version 2021.44.30. In the section Maintenance > Jacking and Lifting > Jacking Procedure, Tesla details the steps on how to lift the Model Y on jacks. 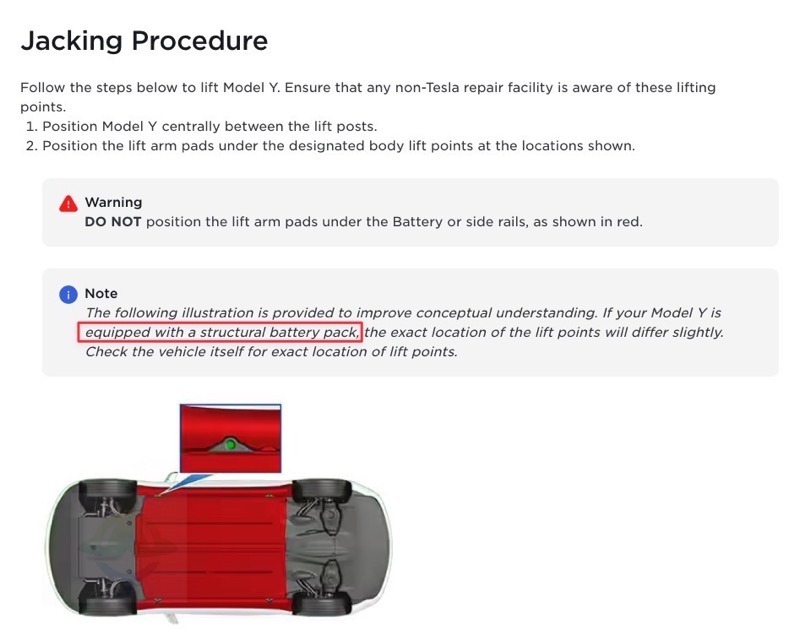 An added note above a picture of the underbody of a Model Y reads, “The following illustration is provided to improve conceptual understanding. If your Model Y is equipped with a structural battery pack, the exact location of the lift points will differ slightly. Check the vehicle itself for exact location of lift points.”

This mention was spotted by Model Y owner Tom Klun (@TKlun1) in a response to @WholeMarsBlog on Thursday evening (via @SawyerMerritt). Klun said he owns an early 2021 Model Y.

Recent rumours have claimed Model Y production may start sometime this month. Tesla’s new Giga Texas and Giga Berlin, once up and running, are expected to produce the Model Y with its newest 4680 structural battery pack.

It remains to be seen if Tesla can meet battery cell production volumes to keep pace with demand for its vehicles in 2022. The company expects the Model Y to be the best-selling vehicle of any kind in the world.