Following reports last month that some Ford dealerships were marking up F-150 Lightning prices by as much as $30,000 USD, the company has officially advised its dealerships to stop adding additional deposits or payments.

Ford has sent a notice to its dealerships warning them against requiring marked-up payments for F-150 Lightning orders, according to a post on the F150Gen14 Forum made on Friday (via Reddit).

One executive from the automaker also released a statement last week saying that F-150 Lightning buyers should settle costs when ordering, in order to prevent dealers from hiking prices.

In the document to dealers, Ford says, “It has come to our attention that a limited number of dealerships are interacting with customers in a manner that is negatively impacting customer satisfaction and damaging to the Ford Motor Company Brand and Dealer Body reputation.” Ford later continued, “Examples of these negative interactions include demanding that customers who are already on the reservation list for the 22 MY F-150 Lightning make additional deposits or payments.”

The document also includes a no-sale provision agreement which dealers have the option of adding to contracts for F-150 Lightning sales.

You can read Ford’s full letter regarding additional deposits and markups on the F-150 Lightning below, courtesy of the F150Gen14 Forum. 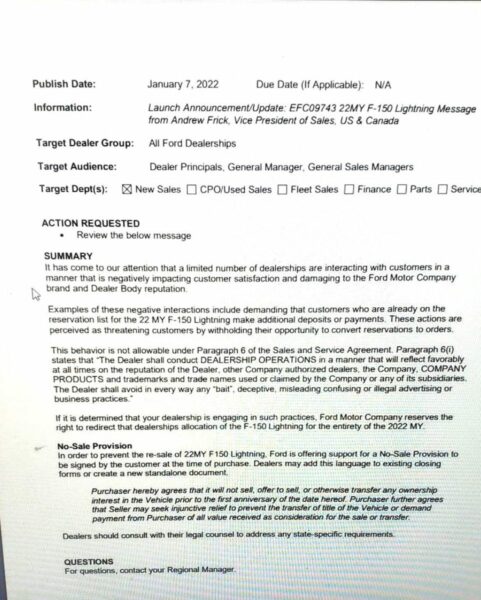 Legacy automaker Ford has reached an important production milestone this week, showing that the company has been able to produce a sizable number of Mustang Mach-E units since it was introduced in 2020. Ford CEO @Jim Farley announced on Wednesday that the automaker produced its 150,000th Mustang Mach-E, ahead of the company’s plans to expand […]
Peter McGuthrie
1 day ago