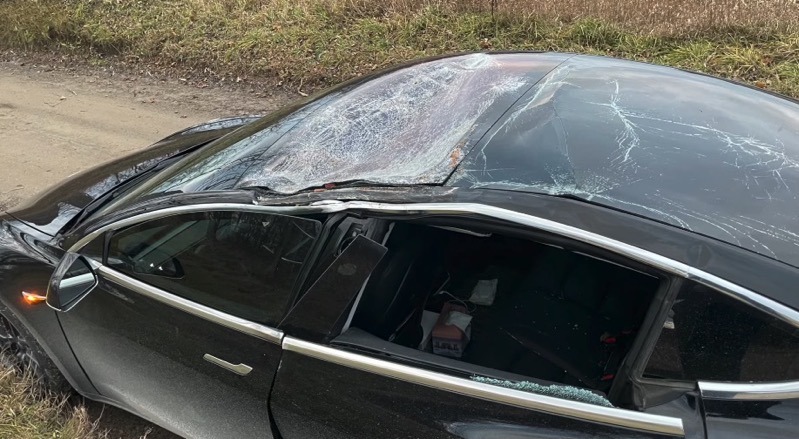 Canadian Sam Fursey is thankful for his Tesla Model 3 for saving his life, and his fellow passengers, after a tree fell on top of the sedan’s glass roof during a wind storm.

The Model 3 owner from Toronto, Ontario, Canada, shared details of the freak accident with the Tesla Model 3 Canadian Group on Facebook.

“If you’ve ever wondered whether your Tesla is tough enough to withstand accidents, it is. This weekend a 2,000 lb+ tree fell directly on top of the car, right above my head,” explained Fursey on Thursday. “I walked away with some cuts and bruises and a mild concussion,” added the Tesla owner. 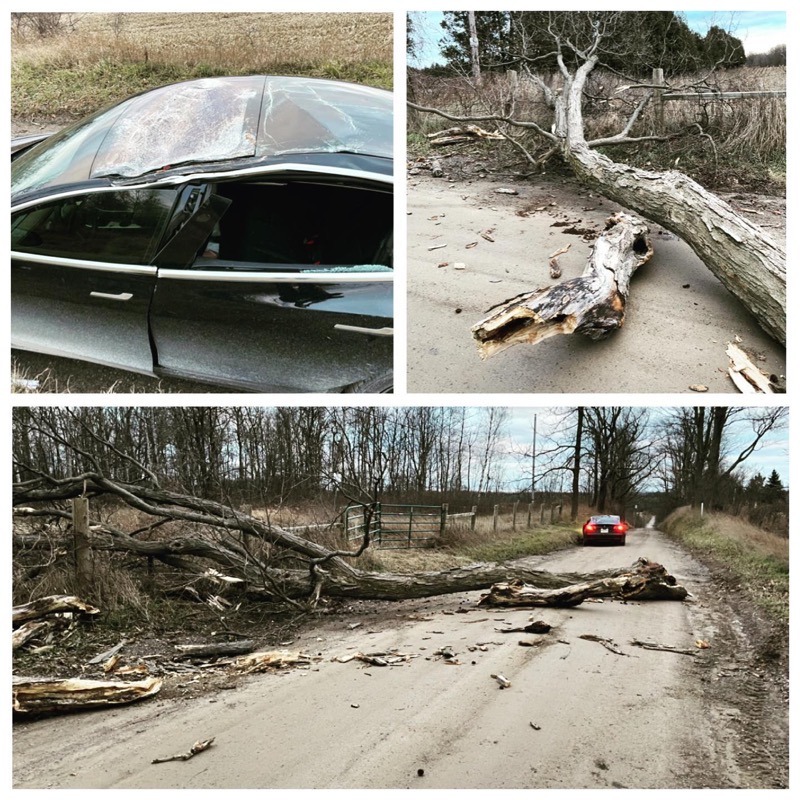 The entire scene was caught on camera by the dashcam of the vehicle following Fursey’s Model 3.

“I was driving my closest friend and his fiancé to their wedding ceremony if you can believe it (they walked away without a scratch). The dashcam footage is from the car behind us, driven by one of the bridesmaids,” he explained.

The tree fell onto the Model 3 while Fursey was driving down a country road, heading to his best friend’s wedding. Both the bride and groom were in the back seat of the Model 3. As the Tesla drives down the road, a massive branch falls off an old tree during the windstorm and “landed directly above me and the car held up,” explained Fursey.

Looking at a replay of the video, it’s not just a branch, but the entire top part of the tree that lands on the Tesla’s glass roof.

His Tesla also did not have any Sentry footage, as the tree fell down out of the field of view of the car’s cameras, said Fursey to Tesla North in an interview. “The timing was so precisely bad it’s crazy,” he added.

Fursey said, “I have some cuts on my head, a sore neck (head got pushed down and forward), and a mild concussion, but considering the size of the branch that’s basically nothing.”

The Model 3 saw its entire frame get “twisted from the impact”, said Fursey. “The car 100% saved my life. Thank you Tesla…and give your loved ones a hug, life can be pretty random,” he added.

Fursey’s wife Kathleen later added, “everyone kept their cool and was able to bring Sam to the hospital safely. Unfortunately, with hospital policies during this time, I wasn’t able to stay with him, but we were able to communicate through each step in his hospital wait.”

What about the wedding? It continued and everything ended well, says the Tesla owner. “I even made it back from the hospital in time to join the reception,” he concluded. Fursey was even able to deliver his best man speech to end the night.

Fursey later told Tesla North he is “recovering well” and has a stiff neck, but “no lasting concussion symptoms or anything.” As for sharing his story publicly, he wanted to reassure Tesla owners of the security and safety of the company’s vehicles, not to seek personal attention.

Back in September, Tesla shared some behind-the-scenes of its engineering when it comes to its glass acoustics and safety.

In September 2019, when Tesla’s Model 3 earned the IIHS Top Safety Pick+ Award, here’s how the automaker highlighted the strength of the sedan’s all-glass roof:

The Institute’s results also demonstrate the exceptional strength of Model 3’s all-glass roof, which is supported by a very strong metal body structure and helps protect occupants in roll-over crashes. During testing, the car’s roof was able to successfully resist more than 20,000 pounds of force – that’s more than if we placed five Model 3s on top of the car’s roof at once. And, the roof earned a higher strength-to-weight ratio score than any other fully electric vehicle that IIHS has ever tested.