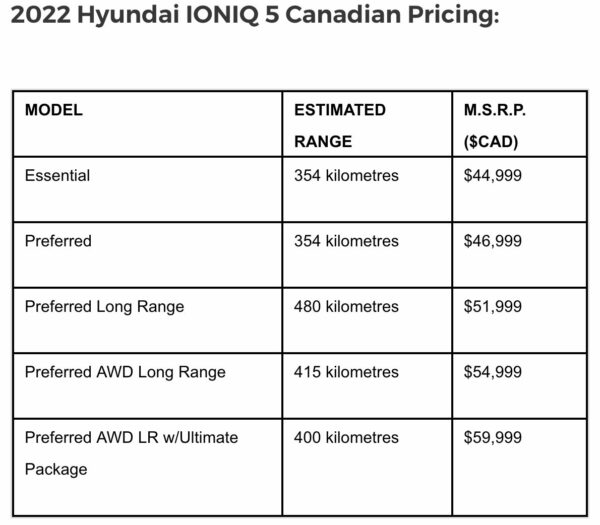 While Hyundai released specs and pricing for its IONIQ 5 electric vehicle for the U.S. (EV) earlier this year, the company has officially revealed its pricing tiers for the Canadian market.

Hyundai has released the 2022 IONIQ 5 electric SUV’s pricing, starting at a retail price of $44,999 CAD for the Essential variant, which offers the user up to 354 kilometers (220 miles), according to a press release this week.

President and CEO of Hyundai Auto Canada Don Romano said, “The IONIQ 5 offers the hallmark traits found in the popular crossover segment: utility, space, cutting-edge design, advanced safety technology and available all-wheel drive. With IONIQ 5’s arrival, Canadians have all that in addition to the added benefit of a vehicle designed to be fully-electric, and from the ground-up.”

Romano continued, “We’ve seen an unparalleled level of excitement surrounding IONIQ 5 from customers and dealers, and we’re thrilled to bring to market an EV presenting tremendous overall value, and also a variety of battery and drivetrain options.”

The IONIQ 5 is set to include ultra-fast 800-volt charging, either a 58 or 77.4 kWh battery pack and a heads-up display (HUD) boasting an augmented reality (AR) mode, which turns the windshield into a large display screen.

In order to qualify for federal EV rebates, pricing needs to be below $45,000 CAD. Hyundai’s entry model is at $44,999 CAD, $1 under the threshold, taking a page from the Tesla playbook.

Tesla has a 146km range-locked Model 3 that’s priced at $44,999 CAD (once you take away destination, documentation, air conditioning and OMVIC fees). Nobody will likely buy this version, but it’s available so that means it qualifies the lineup for the federal EV rebate of $5,000 CAD.