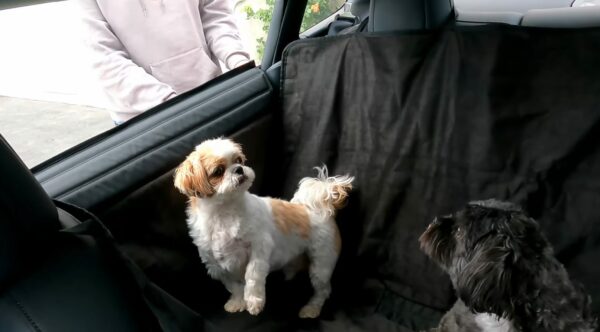 Tesla launched its pet liner for Model S, 3, X and Y units earlier this month, available from the company starting at $135 USD.

On Tuesday, Mother Frunker released a new review of Tesla’s pet liner accessory, made for the company’s Model S, 3, X and Y units. In the video, the host talks about taking the liner out of its bag, installing it, testing it out with a dog, then two dogs, and ultimately testing it out with a timed de-installation test.

The Tesla pet liner is made from a quilted fleece that’s somewhat breathable and comes in a water-resistant three-piece set with door protectors.

In a timed test, wrapping up the pet liner took just over a minute to put back in the bag, emphasizing how easy it is to take on the go and store away when not in use.

At the end of the video, the hosts largely said they liked the pet liner, which they planned to use in tandem with Tesla Dog Mode. The liner takes little time to install and to tear down, while fitting easily in the trunk or elsewhere when not in use.

You can watch the full 10-minute Mother Frunker review of Tesla’s Pet Liner below, from opening the bag to using it with multiple cute pups in the back seat:

Tesla CEO Elon Musk has spoken out in regards to his agreement to buy Twitter on the original terms, after news broke on Tuesday morning. Musk said just now, “Buying Twitter is an accelerant to creating X, the everything app.” When asked if it would be easier to build X from scratch, Musk replied, “Twitter […]
Sarah Lee-Jones
9 hours ago

Tesla has announced it will be removing ultrasonic sensors from its vehicles, the next step of its camera-based Tesla Vision Autopilot. “Today, we are taking the next step in Tesla Vision by removing ultrasonic sensors (USS) from Model 3 and Model Y. We will continue this rollout with Model 3 and Model Y, globally, over […]
Sarah Lee-Jones
11 hours ago

Tesla announced on Tuesday it has hit a milestone of reaching 10,000 Superchargers in Europe. “Tesla owners in Europe now have access to over 10,000 Superchargers, spread over 30 countries,” said the automaker on LinkedIn. “The European network has already grown more in 2022 than any other year, with still 3 months to go,” said […]
Sarah Lee-Jones
13 hours ago