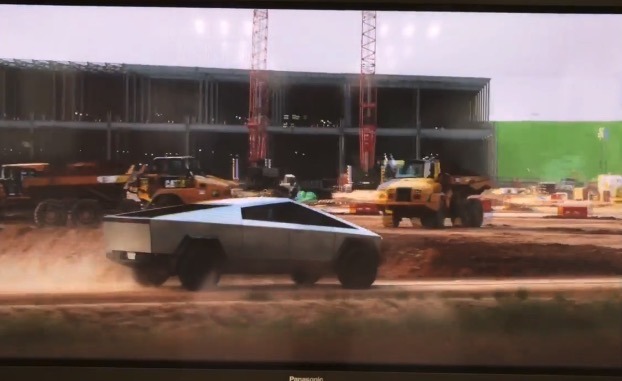 The video shared by Harsimran Bansal (@harsimranbansal) below shows Cybertruck driving on a bridge away from Manhattan in New York City, then also ripping around a field and next to Gigafactory Texas.

Bansal said he filmed the footage at a Tesla showroom on his smartphone.

During Tesla’s Q3 earnings call, the company was asked about Cybertruck. Here’s what Lars Moravy, Tesla VP of Vehicle Engineering, had to say.

“We get a lot of questions on Cybertruck. We’ve been busy detailing the Cybertruck to achieve the prototype version we shared with customers awhile back. As you may have seen recently on social media, we’ve built a number of alphas and are currently testing those to further mature the design.”

“And while those point out a few key additions like rear steer. There are also a number of smaller or less visible improvements, though the product is largely true to the initial vision. We’ll continue to work through the product in the beta stages that we’re in now and look to launch that by next year,” added Moravy.

Tesla plans to start Cybertruck production at Giga Texas, after it starts ramping up Model Y production, slated to start sometime this year.