Tesla’s Model 3 Standard Range Plus Just Sold Out in the U.S. and Canada for 2021 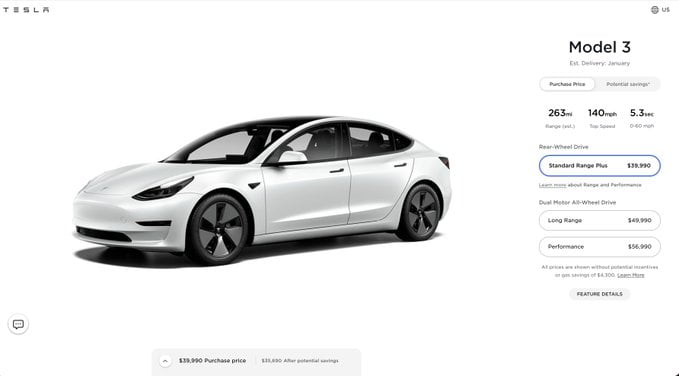 Tesla’s Model 3 Standard Range Plus has just sold out in Canada and the USA, as estimated delivery dates are now showing January 2022 (via @SawyerMerritt).

This means an order placed today for the entry Model 3 won’t be delivered until January of next year, about five months away.

Previously, the entry Model 3 estimated delivery date mentioned November. As for the Long Range version of the Model 3, that’s showing November, while the Performance model is showing 4-7 weeks.

Tesla is facing pressure from the global semiconductor chip shortage and also parts shortages from suppliers.

Musk also answered on the earnings call why Tesla isn’t creating its own chip fabrication—because it’s not easy:

“So in order for Cybertruck and Semi to scale to volume that’s meaningful for customer deliveries, we’ve got to solve the chip shortage working with our suppliers. And someone would say, why don’t you just build a chip fab? Well, OK, that would take us, even moving like lightning, 12 to 18 months. So it’s not like whoop out a chip fab. Like, yeah, look, a chip fab.”