Jeff Bezos Heads to Space and Back with Blue Origin [VIDEO] 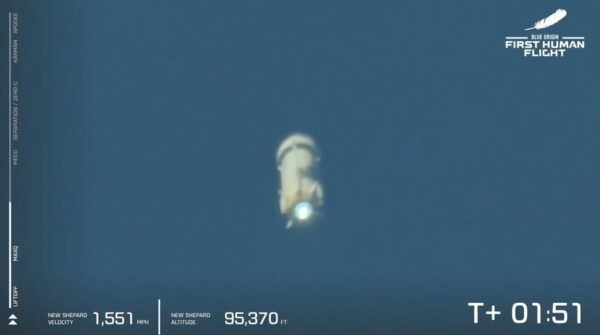 The billionaire space race is officially on, and as Virgin Galactic’s Richard Branson headed to space earlier this month, even selling a ticket to SpaceX head Elon Musk, now Amazon Founder Jeff Bezos has officially made it to space and back

Jeff Bezos’s space travel company Blue Origin has completed its first trip to space in the New Shepard spacecraft, as shared on YouTube by Blue Origin Tuesday morning. The Blue Origin crew included Bezos as well as his brother Mark Bezos, along with Wally Funk and Oliver Daemen.

The launch took place Tuesday morning at a launch site in Van Horn, Texas, and the total flight only lasted about 11 minutes, Blue Origin has prepared for months for a variety of space missions. This includes hopes to have won a moon outpost contract with NASA, which was granted to SpaceX – against Blue Origin’s wishes, which reported that NASA had moved the goalposts in awarding the deal to SpaceX.

After topping 350,000 feet into the air, the spacecraft landed back on the ground safely, and the crew simply had to ground the capsule before it was safe for the crewmembers to exit. “Best day ever!” exclaimed Bezos after the landing back on Earth. The Blue Origin rocket landing is not as ‘sexy’ as SpaceX’s Falcon 9 (“landing legs deploy!”), but it did come back upright.

Tesla Model S Run Over By 18-Wheeler, Occupants Walk Away