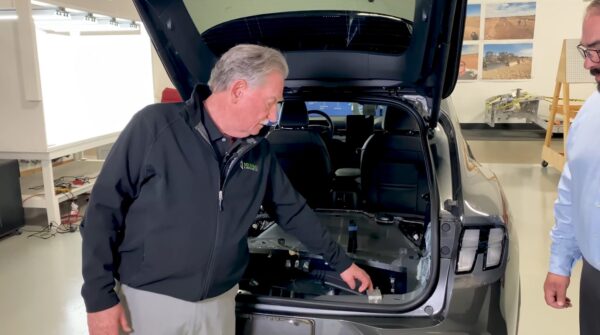 The Ford Mustang Mach-E is a direct rival to the Tesla Model Y, and it similarly features a fair amount of space in its SUV-like rear space – despite a few manufacturing flaws.

In a video released Friday, Sandy Munro performs a rear interior teardown of the 2021 Mustang Mach-E, in which he discusses the pros and cons of the vehicle’s hardware with the back seats removed.

Right off the bat, Munro lifts up the electric vehicle’s (EV’s) scuff plate and criticizes the way the scuff plate’s brackets were engineered.

In addition to criticisms about the scuff plate brackets, Munro also discusses the wedge and pin hatch-closing mechanism of the Mustang Mach-E, which he says “maybe a good idea,” despite being somewhat unique. Munro also praises the rear gate bumpers which reportedly “help the user gauge the gap down below.”

In the past, Munro has also taken a deep dive into the 2021 Tesla Model 3, among a slew of other vehicles. While Munro has mentioned Tesla’s exterior panels being a little bit off, we don’t see any of those complaints in this video on the Mustang Mach-E EV from Ford, which has also been manufacturing cars for over a century.