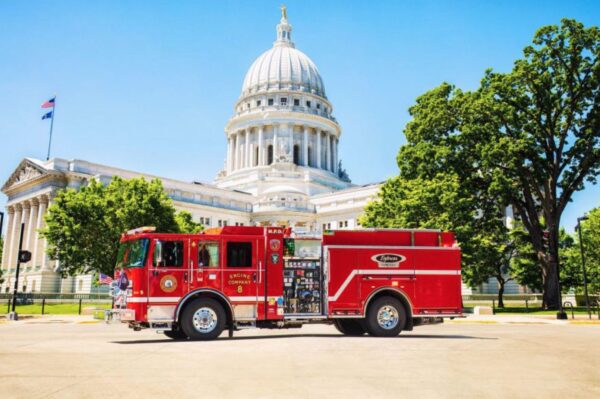 According to a press release on Tuesday, the Madison, Wisconsin Fire Department has put the first electric municipal fire truck into use, featuring a variable transmission that can be used in a zero-emissions mode or paired with an internal combustion engine (ICE) for extra power.

The truck, which is now operational at Madison Fire Station 8 on Lien Road, was formed from a collaboration between Pierce Manufacturing and Oshkosh, and was built on the Volterra electric vehicle (EV) platform, designed for the fire and emergency vehicle markets.

Chief Davis said, “The City of Madison is committed to many sustainability initiatives allowing us to meet our needs without compromising those of future generations.”

Davis continued, “Pierce’s Volterra electric pumper allows us to keep an environmentally-conscious focus on reducing emissions while maintaining our traditional pumper configuration without impacting our operational procedures. We are eager to lead change by responsibly supporting our environment together with achieving our critical daily missions.”

While a handful of municipal electric buses have begun popping up in North America, Madison’s Pumper is the first electric fire truck currently serving the public in the region. Cities around the area have started electrifying their fleets, but industrial EVs, like the electric fire truck, will even further decrease emissions as the burgeoning market continues to grow.