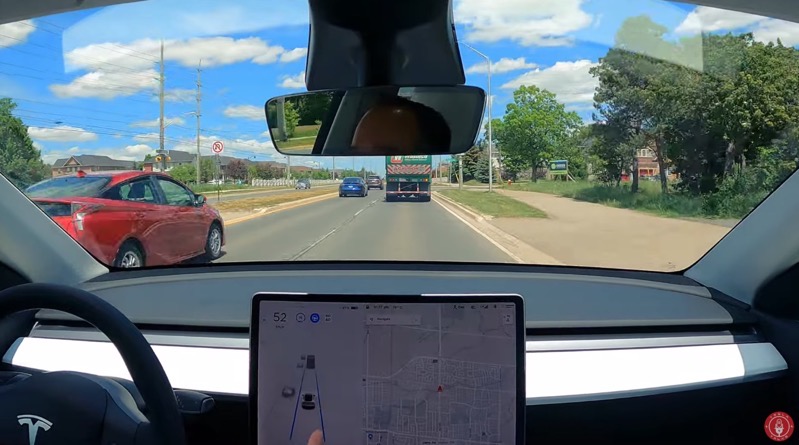 Tesla stated new vehicles produced from April 27 onwards would no longer have radar, but rely only on cameras for Autopilot, with what it’s calling Tesla Vision.

As you can see in the first-drive video above, we can see how Autopilot works with Tesla Vision only on Canadian roads. The vehicle has software version 2021.4.15.11, which also now enables the interior cabin camera for monitoring drivers during Autopilot.

Autopilot with Tesla Vision is currently limited to 75mph, or 120kph. The short test drive with Autopilot shows the car driving as normal, but one concern with the lack of radar is the ability for the Tesla to see the car “ahead” of the one in front of him, which usually has helped avoid accidents well before they happen.

While near the end of the vehicle, the Tesla Vision and cameras do spot a truck in front of the leading car, it’s unclear whether that was due to the tall vehicle, or if the cameras picked it up based on the height of the Model Y.

Expect more in-depth look at Model Y and Model 3 vehicles without radar as more deliveries take place in the coming days and weeks.

Tesla announced on Saturday it has achieved a new milestone, building 2,000 Model Y compact crossover SUVs in one week at its Gigafactory in Berlin, Germany. 2k Model Y built at Giga Berlin this week 🤘 pic.twitter.com/4u4I517wdV — Tesla (@Tesla) October 1, 2022 The milestone comes after Tesla announced it had produced 1,000 Model Y […]
Sarah Lee-Jones
1 day ago