Tesla Factories Can Now Produce Over 1 Million Cars Per Year 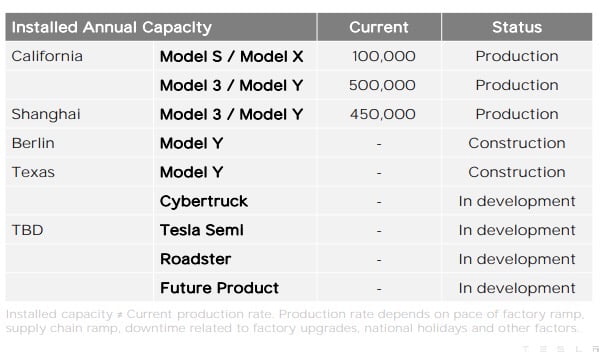 During Tesla’s record first quarter earnings, the company also provided an update for the “installed annual capacity” of its current factories in California and Shanghai, China.

According to Tesla, its Fremont, California factory can currently produce 100,000 Model S and Model X vehicles, along with 500,000 Model 3 and Model Y vehicles per year.

One can only imagine how high this number can go once Gigafactory Austin and Gigafactory Berlin go online later this year.

At Gigafactory Austin, in Texas, Tesla says “the factory buildout continues to progress quickly, remaining on track to start production and deliveries late this year. We recently began moving equipment into the building and are in the process of commissioning them in certain areas,” as we’ve seen in recent flyover videos.

As for the Gigafactory Berlin-Brandenburg in Europe, Tesla says construction is “continuing to move forward, with production and deliveries remaining on track for late 2021.” More machinery continues to be moved into the building and Tesla says “we will continue to increase import volumes to Europe.”