Tesla Tells Owners in California to ‘Charge for Less’, Save 50% on Supercharger Fees

Tesla notified its California customers to ‘Charge for Less’ on Monday morning, sending a notification within its mobile app.

“Avoid the rush and save 50% on your charging fees before 10 a.m. and after 7 p.m. at all Superchargers in California’s major metro areas,” wrote Tesla.

“For specific rates and eligible sites, tap the Supercharger map pain on your in-car touchscreen,” said the company, a per @klwtts: 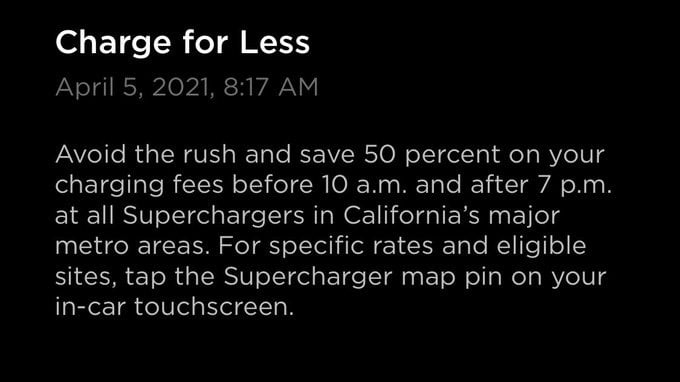 The message from Tesla echoes the California Public Utilities Commission and California Energy Commission’s ‘Keep it Golden’ campaign, which urges citizens to use less energy between 4-9pm, “when less clean energy is available”.

California hopes to avoid last year’s blackouts in the state, ahead of the hot summer months. The state is installing huge batteries into its electrical grid, with more capacity than all of China, according to Bloomberg.

By the time August comes, California will have 1,700 megawatts of new battery capacity, which can theoretically power 1.3 million homes and hopefully avoid last year’s grid emergency.