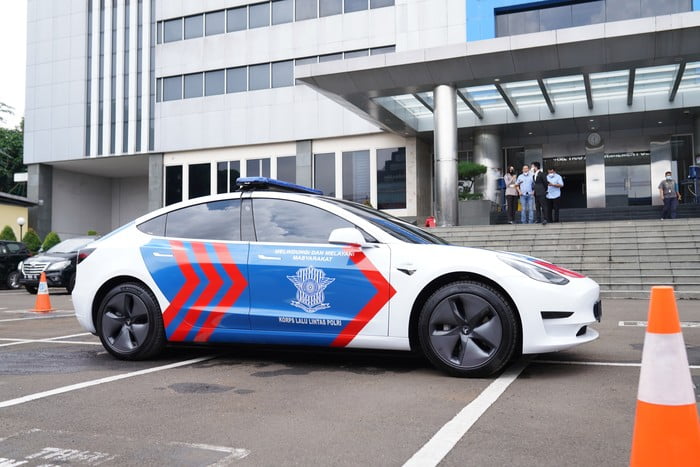 According to a Google Translation of a statement by the Indonesian National Police head inspector, the latter said on February 25, “Today we have guests from IMI, not only to stay in touch but we have many things to talk about for future programs of cooperation and plus, today IMI came here to give a grant of one Tesla vehicle for our traffic patrols.”

Tesla does not officially sell its Model 3 sedan in Indonesia, however it is available from third party seller Prestige Image Motorcars. The donated Model 3 is a Standard Range Plus. It has been modified with police lights and other graphics to represent the Indonesian National Police.

A Model 3 Standard Range Plus can be purchased for 1.5 billion Rupiah from importers, or about $104,773 USD, nearly triple the base model price of $35,490 USD in the United States.

Tesla and Indonesia may be partnering for business, for the latter’s source of nickel to use in electric vehicle batteries. Last month, an Indonesian government official confirmed Tesla had sent the national an investment proposal, but did not elaborate on any details.

Tesla: Melt Snow and Ice Off Your Car ‘Before Even Leaving the House’ [VIDEO]