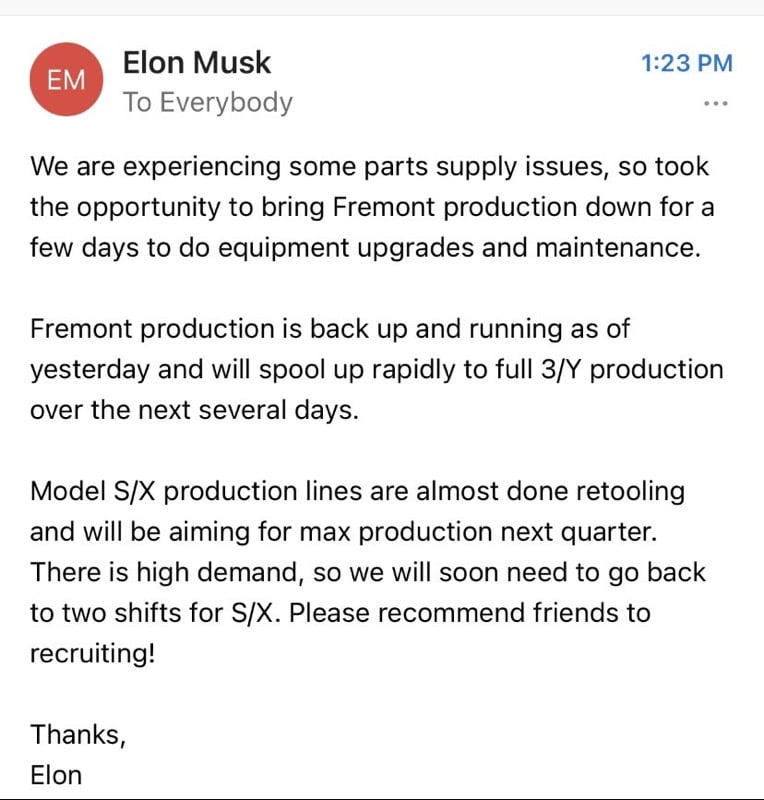 Earlier today, Bloomberg reported Tesla’s Fremont factory was shutting down some of its Model 3 production lines, corroborating an earlier report from Sawyer Merritt.

Now, Tesla CEO has clarified the matter in an email to employees, obtained by @SawyerMerritt:

BREAKING: I have received an email that Elon has sent out to employees earlier today addressing the Fremont parts supply issues. He also discusses the Model S/X refresh timeline.

Here is the full email: pic.twitter.com/0Em373gCPS

According to the alleged email, Musk says “we are experiencing some parts supply issues,” which resulted in Fremont production being down for a few days, for equipment upgrades and maintenance.

But Musk says Fremont production “is back up and running as of yesterday,” and will quickly ramp up for Model 3 and Model Y production “over the next several days.”

“There is high demand, so we will soon need to go back to two shifts for S/X. Please recommend friends to recruiting!”, concluded Musk.

Just earlier this hour, Musk confirmed the shut down. “Fremont shut down for two days (parts shortages) and restarted yesterday,” said the CEO.