Update Oct. 20, 2021: Tesla’s first location in Greater Victoria will be located in Langford, across from Costco.

Last fall it was reported Tesla was looking for a location for a new service center in Victoria, British Columbia, on Canada’s west coast.

Tesla had its eyes set on a former Volvo dealership at the intersection of Douglas and Hillside, but now that appears to have changed.

According to the Victoria EV Association recently (via Tesla Owners Club Vancouver Island on Facebook), “Tesla has cancelled their announced purchase of the former Volvo dealership at the corner of Douglas and Hillside as their Vancouver Island sales and service location. A search for a new location is underway. No reason was provided for the change.”

Tesla’s President of Automotive, Jerome Guillen, posted on LinkedIn last September, indicating the company was searching for a service center in Victoria, B.C.

Located on the southern tip of Vancouver Island, B.C.’s capital city is also home to a large EV community, especially Teslas. Owners on the island need to travel by ferry to Vancouver to pick up new vehicle purchases. Once a new service center arrives, that will most likely change and save owners a day’s trip to the mainland. The same case rings true for Tesla repairs that cannot be done locally at Ferny’s Auto Body or by mobile rangers.

Tesla has been posting jobs seeking Mobile Service Technicians in Victoria in the new year, signalling a launch was in the works. 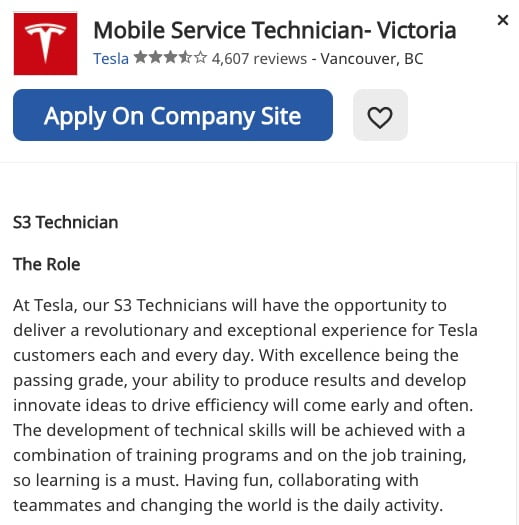 For now, many speculate Tesla would be better off trying to build its own service center in development-friendly Langford, or head up to an industrial park in Central Saanich. Nonetheless, a Tesla service center is coming to Victoria, but it won’t be at the site of the former Volvo dealership, owned by B.C. billionaire, Jimmy Pattison.