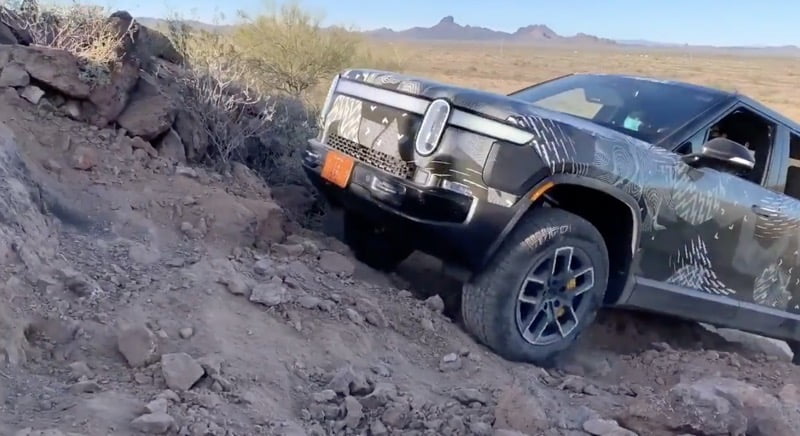 Scaringe shared the video on Saturday morning, along with the caption, “steep grades.” Check it out the R1T truck below, in camoflauge wrap:

Backed by a $700 million investment from Amazon, Rivian looks to compete in the EV space with its upcoming electric truck and SUV, against the likes of leader Tesla. The company already has electric delivery vans in use by Amazon in the United States. Rivian is rumoured to launch an initial public offering (IPO) this fall, with an estimated valuation of $50 billion USD.

Rivian is set to start delivering the Launch Edition of its R1T truck in November of this year according to the company’s website, followed by other deliveries of the Adventure and Explore package in January 2022.

It’s going to be Rivian’s R1T versus Tesla’s Cybertruck. Competition is a good thing for consumers.

Rivian has announced its Q3 2022 production and delivery numbers on Monday. The Irvine, California-based company said it produced 7,363 R1T pickup truck and R1S SUVs at its factory in Normal, Illinois, for the quarter ending on September 30, 2022. That’s a 67% increase compared to the year-ago quarter. Rivian said there are 6,584 vehicles […]
Sarah Lee-Jones
2 days ago

Rivian has hired Diane Lye for the role of chief information officer, a new position that the automaker plans to use to accelerate global expansion, as reported by TechCrunch. Lye previously worked a nine-year stint at Amazon on Web Services before working at Citi’s capital markets division and working in the capital markets division at […]
Peter McGuthrie
2 days ago

As startup electric vehicle (EV) manufacturer Rivian continues to ramp up expansion plans, it has officially gained approval to sell in one important market. Rivian has been cleared to begin delivering its vehicles to customers in Canada, as reported by Automotive News Canada on Friday. The approval came from Transport Canada and was confirmed by […]
Peter McGuthrie
5 days ago