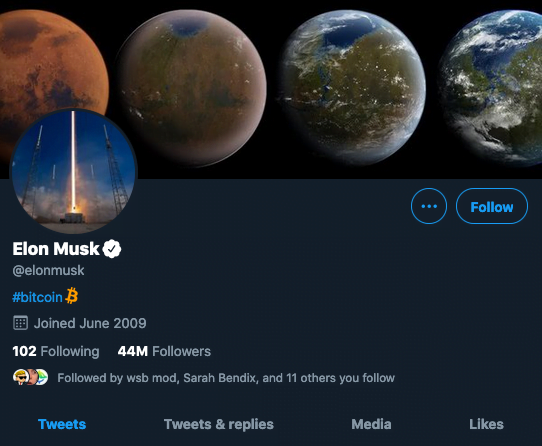 The surge occurred after Elon Musk added ‘#Bitcoin’ to his Twitter bio, with the trading cost of Bitcoin subsequently rising as much as 20%, according to CNBC. Musk followed the bio change up with a mysterious tweet, seemingly-related, writing, “In retrospect, it was inevitable.”

In retrospect, it was inevitable

Bitcoin shares gained more than $5,000 in just an hour, rising up to a high of $37,299. The gains follow a week riddled with volatility, after Reddit’s r/wallstreetbets community helped push the price of Gamestop (GME) and other vastly short-sold stocks up.

In addition to Bitcoin’s rise, meme cryptocurrency Dogecoin’s (DOGE) shares rose almost 1,000% this week, further adding to an already-volatile market. The stock is up about 25% on the year thus far, and many are calling for others to buy and hold the stock. Musk has supported Dogecoin on Twitter in the past.

Last year, Tesla began experimenting with blockchain technology, and many have speculated whether the company will buy into Bitcoin or begin adding the cryptocurrency to the company’s balance sheets.