Electric vehicles (EVs) have grown immensely over the last year alone, and especially in China, the world’s largest auto market.

In December 2020, according to EV Sales, the Chinese auto market was up 12% year over year, capping off a year of struggle with an optimistic view forward. Plugins were up 108% and battery electric vehicles (BEVs) up 52%, with the country’s city-style EVs stealing the spotlight for December, with three top-selling models. 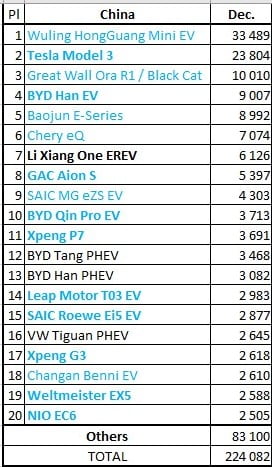 Impossible to say, but VW has traditionally done very well in China and is a well respected brand. Tesla has higher end market, VW just under so could easily match Tesla sales. Wuling is booming now due to subsidies ending, maybe they cannot sustain long term.

The country’s best-seller in December was, perhaps unsurprisingly, the cheaper Wuling HongGuang Mini EV, which sold a total of 33,489 units. Other city EVs that sold well were the Great Wall ORA Black Cat and the SAIC Baojun E-Series, which sold 10,010 units and 8,992 units respectively, landing them titles as China’s third and fifth-best selling EVs.

To be sure, the city EV style is taking off in China, and their prices are significantly more affordable than those of electric sedans. Still, few things can beat the comfort of the classic sedan, as shown by the country’s second and fourth-best selling EVs.

The Tesla Model 3 hit record sales in China in December 2020, with an impressive total of 23,804 units sold, almost 15,000 units more than the next best on the list and landing it the second-best selling EV for the month.

Looking at overall numbers for 2020, the Tesla Model 3 was the top-selling EV in China for the year, taking a 20,000 unit lead over the Mini EV. This marks the first time a foreign-owned automaker has achieved this in China.

Tesla is already seeing huge demand for its Model Y SUV in China, so it will be interesting to see how 2021 numbers play out. 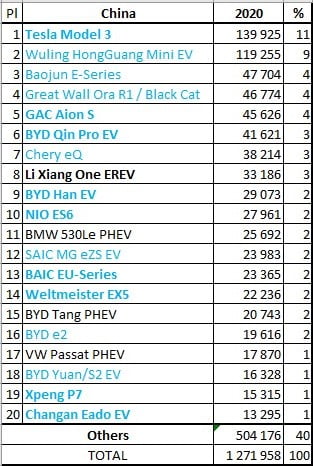 In any case, China’s market is an important one, being both the largest market, and the market with the most EVs currently available. With 2020 finally put to rest, 2021 is likely to bring an exciting new horizon to the face of zero-emissions vehicles.