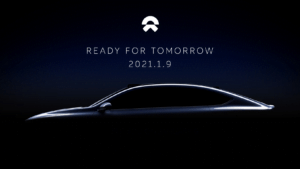 All-electric vehicle (EV) manufacturers must start somewhere – and many, like NIO, are already starting off on a better foot than legacy automakers like Ford.

After announcing record-high numbers for 2020 deliveries, Chinese EV startup NIO has shared plans to launch its flagship sedan on January 9.

The automaker, a direct competitor to US-based Tesla in the world’s biggest auto market, is also planning to unveil its autonomous driving technologies at the launch event, alongside other new announcements.

The interior design of the first sedan of #NIO. More to be released on Jan 9, NIO Day. $NIO pic.twitter.com/c5dylO4KxF

The event, dubbed NIO day, will be held in Chengdu, China and will include musical performances from composer Shi Lei Chang, musician Wang Feng, and NIO BAND, a NIO-hype group who wrote the day’s theme song, “The Future is Ahead.”

In December 2020, NIO saw a 121% year-over-year increase in deliveries of its ES8 SUVs, with a total of 7,007 vehicle deliveries in China. Additionally, the automaker reached a new monthly high for the fifth consecutive month, indicating it may have a shot at keeping up with Tesla in years to come.

NIO also ranked higher than Tesla in a recent JD Power EV survey, further making the case for the Chinese company’s worthiness to stand up to Tesla in the world’s biggest EV market, NIO’s own backyard.

As NIO cements its place amongst an electric horizon, the company won’t be free of obstacles from EV giant Tesla. Still, it’s set up for success in the long-run, at least compared to traditional gas car manufacturers.