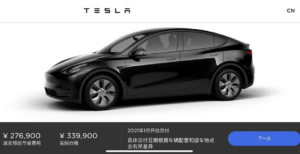 Tesla’s Gigafactory Shanghai has been producing the long-anticipated Model Y for the Chinese market for the past few months, but as of today, it has finally begun selling and delivering to customers.

According to a rumor reported by Tesmanian, Tesla has already received 100,000 orders for its 2021 made-in-China (MIC) Model Y, within the first 10 hours of the vehicle’s updated pricing announcement.

Corroborating the rumor, Tesla China’s official Weibo account posted a note a few hours later, saying that the company had received “too many” orders on its website.

Tesla wrote, “Currently, there are too many orders on the official website and may not be refreshed. Please be patient.”

While the Performance Model Y is not set for delivery until the latter half of 2021, the Long-Range Model Y will begin delivering this month.

At first glance, the Model Y reminds us of few elements of the 2021 Model 3; namely, the interior and a new center console, both of which are similar to the previously-refreshed Model 3 line.

In addition, the new Model Y also includes a heat pump and a HEPA filter for Bioweapon Defense Mode, both new to the SUV.

As the world continues its transition to sustainable transportation, the Model Y is expected to sell well throughout 2021. And with the SUV now publicly available in the world’s largest auto market, the sky is the limit for Tesla’s Model Y deliveries.