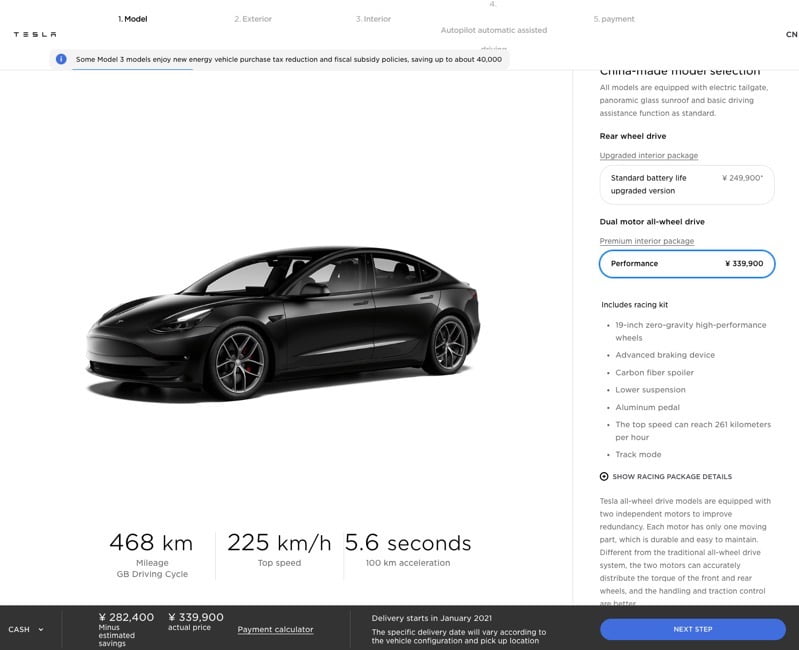 Tesla launched sales of its Model Y SUV in China on New Year’s Day, kicking off 2021 with a bang.

The Model Y gains a heated steering wheel, plus gets a HEPA filter for Bioweapon Defense Mode, plus a revised door trim and centre console as seen from the latest Model 3 refresh.

But there’s even more now for the made in China Model 3. Tesla has added a heated steering wheel for the Model 3 in China, matching the Model Y.

With both the Model 3 and Model Y in China featuring the same door trim, it seems inevitable this will eventually trickle to the United States, as Tesla streamlines its supply chain parts.

MIC Model 3 Performance is now officially online. The price is RMB 339,900, which is the same as the Model Y LR AWD.

WHAT A NIGHT! $TSLA

Also cut from Tesla’s website in China is the Model 3 Long Range, while the Performance version debuts with 19-inch zero-gravity wheels. The Model 3 Performance is priced the same as the Model Y Long Range AWD in China. Tesla is making buyers choose wisely here.

All eyes are on Tesla to see if the company hit its goal of 500,000 deliveries in a single year. With the kick-off of Model Y in China, along with the Performance Model 3, the company is off to a big start in 2021.

Recent weeks have brought on conversations about Tesla’s price cuts in markets around the world, and now the automaker is pushing a new message on its website for Model 3 leasing. Tesla’s Model 3 is now leasing at prices as low as $399 per month, according to a change on the automaker’s website yesterday, notes […]
Peter McGuthrie
1 day ago