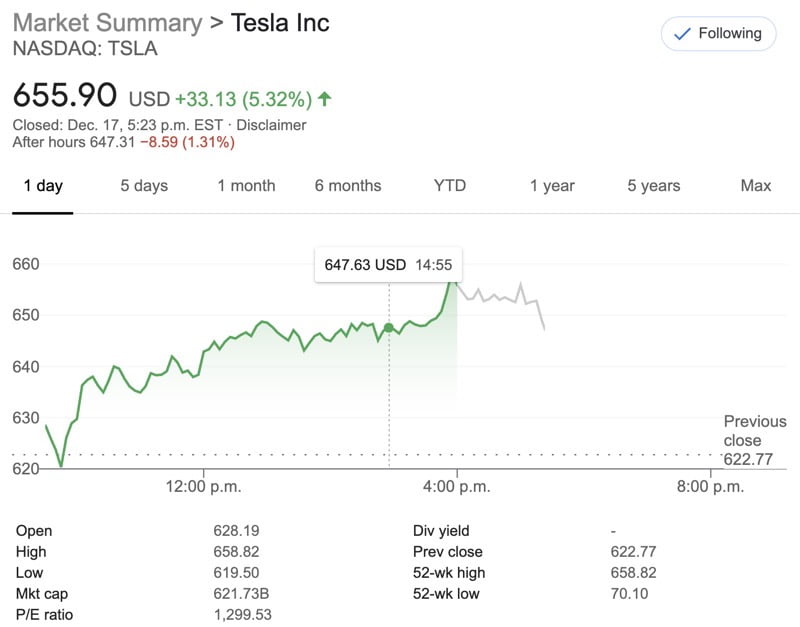 The closing price of Tesla on Friday will determine the stock’s weighting in the S&P 500. Tesla has about 80% of its stock available for trading, while the rest is held by Elon Musk and other insiders. Tesla currently has a market cap of $619 billion.

According to S&P Global Ratings on Thursday, it upgraded the rating on Tesla’s debt, up from BB- to BB, inching closer to BB+ and A3 at the top.

S&P analysts said Tesla’s “mounting liquidity has substantially reduced its financial risk,” according to Marketwatch. Tesla recently closed a $5 billion stock sale, its second capital raise of the year. The company is expected to end 2020 with well over $19 billion in cash and equivalents, which should bring its debut to “essentially zero”, says the S&P.

“In addition, the company continues to improve operating execution, become more efficient in production, and make strides in its global expansion,” added the S&P analysts.

Tesla has increased delivery wait times for all models except the entry-level Model Y in China to 4-8 weeks — reports CnEVPost. The move is in stark contrast with delivery timeline changes made by Tesla in recent weeks, which cut wait times down significantly. For some models, Tesla managed to bring delivery times down to […]
Nehal Malik
9 mins ago

If you’re planning to finance your next Tesla purchase in the United States, rates have increased to kick off the fourth quarter. As noted by Waiting4Tesla.com (@w4tsla), financing rates for Model S/X and Model 3/Y on the Tesla website in the U.S. have increased 0.25%, now showing as 4.74% (previously 4.49%). Tesla partners with major […]
Sarah Lee-Jones
4 hours ago

Tesla on Friday held its annual AI Day event to showcase the company’s latest leaps in Artificial Intelligence, automation, and computation. The event kicked off with Tesla showing off the first working prototype of of ‘Optimus,’ the long-awaited Tesla Bot. Despite merely being a prototype, Optimus was able to walk out on stage, wave to […]
Nehal Malik
6 hours ago