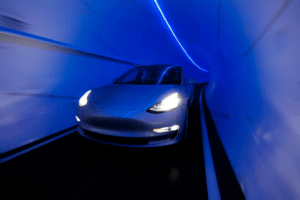 A concept rendering of an EV driving through a Boring Co. tunnel. Photo: Boring Company

Elon Musk’s Boring Company has two routes planned for action on and around the Las Vegas strip, as reported by Las Vegas Review Journal. Applications filed by the company will be evaluated in February by the Clark County Commission meetings.

If they are to pass, they’ll go on to enter encroachment and licensing agreements with the county, to coordinating building permits, fire approval, and, ultimately, construction, according to Nancy Amundsen, Clark County director of comprehensive planning.

Amundsen said, “Therefore, they can commence construction only after they have obtained all necessary permits and agreements, which is not going to be immediately.”

All these people calling the Boring Co. useless are clueless. Obviously, if they can make long tunnels affordably, they will be very useful. The Las Vegas project is more of a proof of concept but even that will expand and larger cities will start contracting the Boring Co.

Completion of the Boring Company’s Convention Center Loop is expected at the time of the center’s reopening to the public. The whole network is planned to be around 15 miles in length upon completion of all the planned tunnels.

In a letter to the county, The Boring Company wrote, “The project will provide the quick, environmentally friendly and efficient movement of people within Clark County and its surroundings without disrupting activities occurring above ground.”