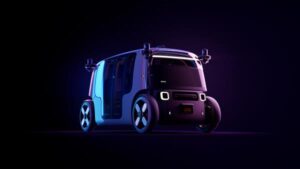 Autonomous driving is a hot topic in the auto industry today, with companies like Tesla releasing beta version of its Full Self-Driving (FSD). However, they are far from the only ones working on the technology, as new announcements continue to expand the autonomous driving market.

According to a press release, Zoox, an independent subsidiary acquired by Amazon earlier this year, has announced first looks at its fully-autonomous, purpose-built robotaxi. The vehicle is capable of speeds up to 75 mph, and has over 100 proprietary safety innovations, making it extremely safe while producing no emissions.

The carriage-style four-seater has a unique combination of cameras, radar, and LIDAR technology, allowing the vehicle a 270-degree field of view. In addition, the vehicle has a 133 kWh battery, which allegedly allows it to operate for up to 16 hours on a single charge.

Good morning to the @zoox autonomous vehicle and nobody else pic.twitter.com/QbrvlrImgr

Aicha Evans, Zoox CEO, said, “Revealing our functioning and driving vehicle is an exciting milestone in our company’s history and marks an important step on our journey towards deploying an autonomous ride-hailing service.”

She continued, “We are transforming the rider experience to provide superior mobility-as-a-service for cities. And as we see the alarming statistics around carbon emissions and traffic accidents, it’s more important than ever that we build a sustainable, safe solution that allows riders to get from point A to point B.”

Honda has been granted Level 3 autonomy by the Japanese government, in spite of the fact that its autonomous-driving systems are not yet available to the public. Tesla, on the other hand, has released its FSD in a public beta form, which only operates at Level 2 autonomous driving.

As the world continues on the path to fully autonomous driving, Zoox has certainly made a name for itself. It’s unclear when the robotaxis will become available for public use, though the company is well on its way with testing operations happening in Foster City, San Francisco, and Las Vegas.