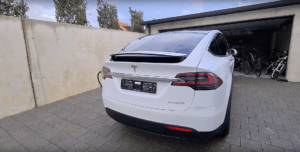 In a video shared Tuesday by Oscar Lax, the host shares his 2021 Tesla Model X Performance as well as some of its new features as compared to prior editions of the vehicle. The video takes viewers through a quick tour of the new Model X, showing off both exterior and interior updates.

The host begins by sharing that this is his third Model X, after the 100D and the standard Dual Motor Edition. This marks the first Performance model the owner has purchased. He also shares that Tesla included a set of winter wheels for free with his Model X, and that the service center would allow him to switch to the stock tires at any time.

Upon stating his first impressions, the owner says that the Performance model is a big upgrade and is much more well-put-together than his previous Model X. The 2021 version he owns is also of the 7-seat variety, meaning that there is a foldable second row too.

The Performance Model X, like other versions, has its classic Falcon Wing doors for rear passengers.

We also get a glimpse at Oscar’s wall charger in his garage, sporting a signature from Elon Musk, a free Tesla award.

“Going from a regular X to a Performance makes a big difference, when you set the drive mode to Ludicrous the car takes on a new personality, almost like it instantly sheds a big chunk of weight and is ready to and wants to play,” explains Oscar.

“The ride is quieter, [Tesla] worked on soundproofing, the various stalks and controls have a tighter feel, less clicky, plastic sound. It’s hard to pinpoint exactly but you can tell the ergonomics have been refined,” added Oscar on Reddit.

The Tesla Model X Performance also recently had a range increase, and is now rated for up to 341 miles, up from the previous rating of 305 miles. In any case, the 2021 Model X Performance looks like a great electric vehicle (EV) with lots of cargo space and plenty of range – and the host in the video seems to think so too.