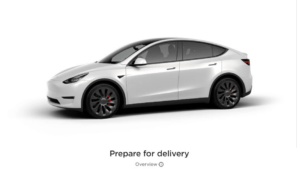 The Tesla Model Y has changed status to “prepare for delivery” for a number of preorder customers. Photo: Tesmanian

Tesla’s Model Y 7-seater has changed status to “prepare for delivery” for those who pre-ordered the EV on the company’s website, according to Tesmanian (save 10% off floor mats with coupon TESLANORTH10). The change signifies that the Model Y units are nearly ready to be delivered, and may even beat the company’s original goal of early December deliveries.

The updated, 3-row Model Y 7-seater was softly announced in mid-October, as Tesla CEO Elon Musk tweeted a response saying that the company would be “starting production on [the] 7-seater next month, [with] initial deliveries early December.”

After the “prepare for delivery” phase, the system should request follow-up personal information, if it is to follow the same steps as prior Tesla vehicles. This information includes the buyer’s name, social security number, and a picture of their license, before proceeding to payment options.

As the world of EVs grows into a complex web of auto/tech companies, models, suppliers, and consumers, we can also expect a marked difference in emissions being produced by cars on the road. While the delivery of the 7-seater Model Y is but one of many exciting vehicle models in the process of lowering emissions, it’s, admittedly, a pretty cool one for Tesla fans, and especially for those who have already placed their Model Y orders.

As for the Model Y Long-Range RWD configuration? Still waiting on that update, Elon…

Tesla announced on Saturday it has achieved a new milestone, building 2,000 Model Y compact crossover SUVs in one week at its Gigafactory in Berlin, Germany. 2k Model Y built at Giga Berlin this week 🤘 pic.twitter.com/4u4I517wdV — Tesla (@Tesla) October 1, 2022 The milestone comes after Tesla announced it had produced 1,000 Model Y […]
Sarah Lee-Jones
2 days ago