Tesla is currently exporting numerous Model 3 units to Europe and these newly refreshed cars may have new Panasonic battery cells, if an alleged screenshot in Germany proves true.

According to speculation on the German TFF-Forums, one user shared an image of what claims to be the shipping papers for a new Model 3 headed to Germany. The document lists battery capacity of 82 kWh on this new Model 3, compared to 79 kWh on 2019 and 2020 Model 3s that do not have the latest refresh.

Check out the image below: 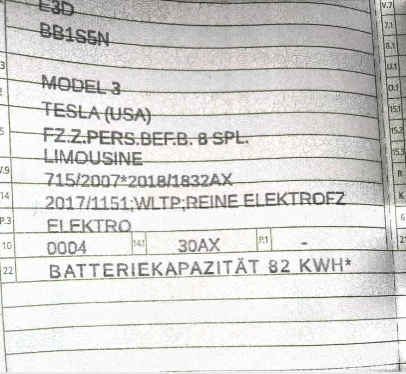 We will most likely have to wait for more users to share their similar registrations to confirm these new battery cells from Panasonic, which announced in August it would invest $100 million into Tesla’s Giga Nevada battery factory. Pansonic said it hoped battery capacity would be able to increase by up to 5% at the time.