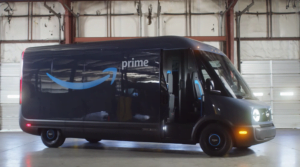 On Thursday, Amazon announced its first custom electric delivery vehicle, in its most recent attempt to reach goals of net zero carbon by 2040. The company has been collaborating with EV company Rivian to make three different, custom delivery vehicle models, the first of which is expected to deliver in 2021.

Ross Rachey, Amazon’s Director of Global Fleet and Products, said, “When we set out to create our first customized electric delivery vehicle with Rivian, we knew that it needed to far surpass any other delivery vehicle. We wanted drivers to love using it and customers to feel excited when they saw it driving through their neighborhood and pulling up to their home.” He continued, “We combined Rivian’s technology with our delivery logistics knowledge, and the result is what you see here – the future of last mile delivery.”

The vehicle will be equipped with a number of exciting safety features, including Alexa for hands-free access, as well as 360 degree exterior cameras to offer drivers an entire view of the vehicle’s surroundings.

Through The Climate Pledge – Amazon’s commitment to being net zero carbon producers by 2040 – Amazon expects to put 10,000 Amazon EVs on the road by 2022, and 100,000 by 2030. If the company can deliver on its promises, it will certainly set an important precedent for other companies, as the world prepares for a more sustainable future.