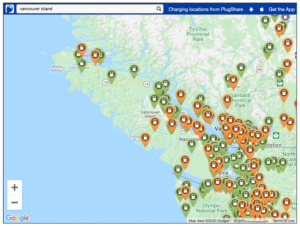 One major problem faced by electric vehicle (EV) owners today is trying to find a charging station as more and more people switch away from gasoline vehicles. While the problem is being addressed rapidly and new chargers are popping up almost daily, the issue remains that many businesses and EV owners need to drive far out of the way to keep their vehicles on full battery.

The goal is to offer more options for clean transportation to residents of the area, and the locations of the new chargers were decided based upon public demand, and gaps in the current infrastructure’s EV charging offerings.

About the announcement, Sheila Malcomson, Parliamentary Secretary for Environment of B.C. said, “People in Nanaimo and on Vancouver Island are strong supporters of green, clean and affordable communities.” She continued, “This B.C. investment will help people to switch to electric vehicles and continue to reduce greenhouse gas emissions.”

British Columbia’s CleanBC Communities Fund will offer $230,000 (CAD) for the initiative alongside $275,000 (CAD) from Canada’s federal Green Infrastructure Stream of the Investing in Canada Infrastructure Program. Additionally, local governments in the region are offering up a combined total of $183,000 (CAD), to round out the financial package.

The new charging stations are sure to reduce pollution in the BC area, and are another great step for Canada in encouraging the population to seek sustainability.