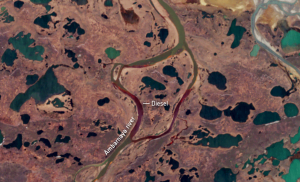 Part of the hope in the future of electric vehicles is the minimized impact they’ll have on our environment. However, this goal cannot be achieved if products are not also sourced ethically and sustainably, or the efforts will be counterproductive at best.

As reported by Eye on the Arctic, indigenous groups in Russia wrote a letter to Elon Musk encouraging him and Tesla to boycott Nornickel, a Russian company behind numerous environmental disasters, until the company conducts an assessment of its own damage to the environment. The Aboriginal Forum appealed to Musk in light of the most recent catastrophe, in which Nornickel spilled 20,000 tons of diesel fuel into an Arctic river.

Tesla may receive large amounts of nickel, copper, and cobalt from the company, and would have to source these products elsewhere if it were to honor the Aboriginal Forum’s requests. According to the Forum though, this spill was not just an isolated incident.

The Aboriginal Forum, which protects the rights of indigenous peoples in the North, Siberia and the Far East, called on Tesla's head, Ilona Mask, to boycott Nornickel (GMKN) by refusing to buy nickel, copper and other products from Nornickel. #ban #tesla #ElonMusk

The indigenous peoples directly affected by Nornickel’s environmental concerns are the Sámi, the Nentsy, Nganasan, Entsy, Dolgan and Evenki, most of which live on the Taimyr Peninsula in Siberia, and the former of which is in the Murmansk region in Russia.

Though Tesla doesn’t disclose where they source materials from, Nornickel is one of the world’s largest metal suppliers, and it’s likely they’re supplying Tesla, too. The car company has already been looking for its needs to be met more sustainably though, and many have responded, including pledges from this Canadian mining company.

“Go for efficiency, as environmentally friendly, nickel mining at high volume. Tesla will give you a giant contract for a long period of time if you mine nickel efficiently and in an environmentally sensitive way. So hopefully, this message goes out to all mining companies.”

In any case, only time will tell how Tesla and Musk respond to these calls, though the clock is ticking on the environmental catastrophe to come.

Although Tesla CEO Elon Musk has previously said he hopes to shift away from end-of-quarter sales pushes, the automaker is expected to have another huge batch of deliveries heading to customers to end the third quarter. Musk apparently sent an email to employees requesting help for a “very high volume” of third-quarter deliveries, and analysts […]
Peter McGuthrie
7 hours ago