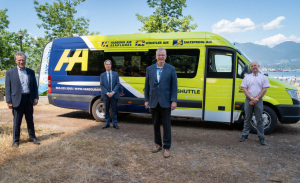 Many countries are doing what they can to support and incentivize the movement of going green, including Canada.

CTV News reported on Wednesday morning that British Columbia is offering rebates for electric specialty vehicles to incentivize companies to go green. The new addition to the initiative includes a variety of vehicles including ATVs, off-road motorcycles, small marine vessels, snowmobiles, and a number of other covered options.

Congratulations to @HarbourAirLtd on the launch of their electric passenger shuttle purchased from @GreenPowerBus using the Province’s SUVI rebate that helps #BC companies. @GeorgeHeyman & I were thrilled about this #EV! #GoElectric #CleanBC See details ➡️ https://t.co/QZBIZsSwte pic.twitter.com/PiB6TrngLm

British Columbia’s Specialty-Use Vehicle Incentive Program (SUVI) offers buyers up to $50,000 CAD in rebate money for the purchase of commercial, electric vehicles. For individuals, rather than businesses, the program also offers the option of a personal clean energy vehicle rebate of up to $3,000 CAD.

While the previous year’s personal clean energy vehicle rebate offered individuals $6,000 CAD, the cut allowed the province to broaden the scope of vehicles covered, ultimately allowing a wider array of vehicles to be included, and more options for businesses to participate. Although this cut affects many seeking personal electric vehicles, the increased commercial option will have greater ultimate influence on the emissions decrease from using larger gas vehicles commercially.

Those in British Columbia looking to purchase an electric vehicle, especially for commercial use, now may be a good time to shop.

Another state is targeting a major shift to electric vehicles (EVs) by the mid-2030s, following California’s mandate on going emission-free. New York Governor Kathy Hochul (D) said on Thursday that the state will need to shift to selling only zero-emission vehicles by 2035, as reported by The Hill. “We’re really putting our foot down on […]
Peter McGuthrie
40 mins ago