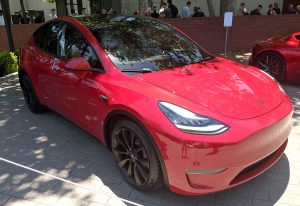 Tesla first unveiled their Model Y compact SUV last year, revealing that they would also be developing four modified versions of the electric SUV. Along with the Standard Range and Long Range models, the Dual Motor All-Wheel-Drive (AWD) and Performance vehicles would also feature a Long Range battery.

As reported by Electrek, Tesla has canceled any plans to develop the Standard Range model, and have instead opted for a Long Range Rear-Wheel-Drive (RWD) model.

An inside source stated that Tesla has recently begun trial production of their Model Y Long Range RWD, These vehicles have been put together on the GA4 assembly line, but the trials were temporarily put on hold so some alterations could be made.

It is worth noting that this model will be quite similar to the Long Range Dual Motor AWD vehicle. The main difference will be that the additional front motor will be removed. The price of the Model Y Long Range RWD has not been confirmed yet, but there were some alleged reports it should range between $45,000-$48,000.

Since trial production is one of the later-stages of vehicle manufacturing, we can assume that actual production isn’t too far away. The Model Y Long Range RWD should be released within the next few months according to Musk.

Tesla has announced its production and delivery numbers for Q3 2022. The company said it produced over 365,000 cars and delivered a record 343,830 vehicles in the third quarter. “Historically, our delivery volumes have skewed towards the end of each quarter due to regional batch building of cars. As our production volumes continue to grow, […]
Sarah Lee-Jones
22 hours ago