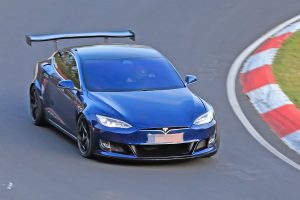 After keeping their secret Roadrunner project under wraps, information about a new Tesla project (codenamed “Palladium”) has been revealed. It is currently being developed at Gigafactory Nevada and the Fremont Factory.

The project is to include improved Model S and Model X Plaid vehicles, with new battery and drive components. Tesla already began working on Model S Plaid prototypes last year. Electrek reports that the powertrain will feature a tri-motor configuration for Plaid.

“According to people familiar with the matter, the new Palladium update is going to involve new battery modules and drive units that are going to serve as the basis of the upcoming “Plaid” version of Model S and Model X,” reports the publication.

According to a Tesla employee, the Plaid Tesla models will allegedly include a new vehicle body. This means that the updated Model S and Model X cars will may have special Palladium bodies. These two models also received a software update yesterday for newer models to achieve new peak charging rates of 250 kW at V3 Superchargers.

While not many details have been released yet, we can assume that Project Palladium might be ready by Tesla’s Battery Day on September 22.