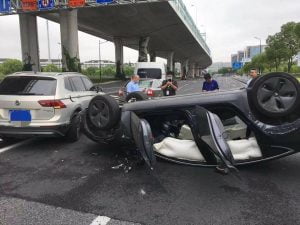 Tesla vehicles have a prescient autopilot system and a plethora of safety features. Even so, Tesla vehicles are just as prone to accidents as any other vehicle. However, similar to many other aspects of their engineering, Tesla vehicles carry a number of features that protect passengers in the event of a collision. A new story showcasing an accident in Shanghai shows how the Tesla Model 3 roof saved some passengers’ lives.

In a thread on Twitter, user Yan Chang shares photos of a rollover collision that happened in Shanghai yesterday. As you can see in the photos provided here, the car completely rolled over. However, the roof of the Model 3 did not cave in on the passengers. What may have been a fatal accident was prevented by the Model 3’s robust roof and body architecture.

According to a new report at Tesmanian, there are some connections between the accident in question and the production of the made in China Model 3. “The accident does support Tesla Giga Shanghai’s work on the made in China (MIC) Model 3. As reported in a previous Tesmanian report, crash tests conducted by the China Insurance Research Institute (CIRI) showed that Giga Shanghai made tremendous safety improvements to the MIC Model 3.”