Tesla has delivered in what appears to be the first Model Y compact SUV to a store in Vancouver, British Columbia, Tesla North can confirm.

Earlier this month, a local Vancouver Tesla store confirmed deliveries would take place in June. Now, according to a source familiar with the situation speaking on the condition of anonymity, Tesla North has learned one of the first Model Y SUVs has been delivered (if not the first) in Western Canada, to a store in Vancouver.

The Model Y was delivered on Saturday, June 6, 2020, a Deep Blue Metallic Performance version (without the added Performance Upgrade) said the source, seen below in an image shared with Tesla North: 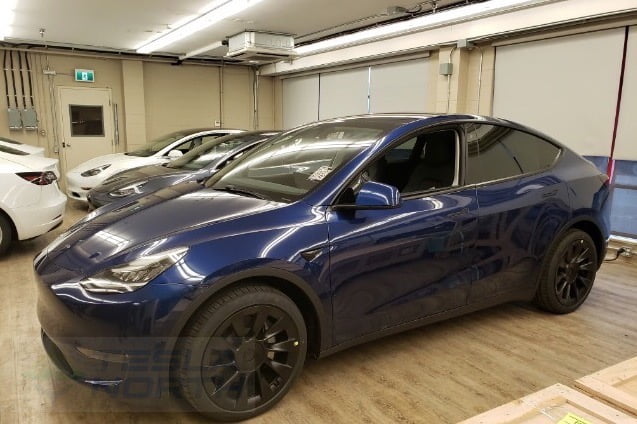 Currently, this Model Y configuration on Tesla.com will cost you $87,290 CAD in Canada, after adding in the blue paint (+$1,300 CAD). Tesla currently allows Model Y Performance configurations the option to have 19-inch Gemini or 20-inch Induction Wheels at no extra cost, with the latter a recent change, we’re told.

For Model Y reservation holders in Canada, numerous have noted their accounts online have started asking for registration, trade-in and payment details.

One Tesla North reader in Kitchener, Ontario, noted after submitting their credit application, received a 72-month APR rate of 2.65% from Scotiabank for their Model Y. This order was placed in February 2020 (updated: 2020, not 2019) for a Long Range AWD with 19-inch Gemini wheels.

Tesla Vancouver stores have sent out emails asking Model Y reservation holders to complete their online account information. “Tesla Vancouver is expected to be receiving a limited amount of Model Y orders in the Month of June, by completing and submitting your profile it will speed up your delivery process and put you higher in the queue to get into your new Model Y!”, reads an email shared on the TMC Forums.

Other Tesla Model Y reservations in Quebec have started to receive Model Y VINs ahead of deliveries, signalling the imminent launch of the electric vehicle in Canada.

If you’re in Vancouver, keep your eyes peeled for this blue Model Y and expect vehicles to hit the streets this month, as Tesla is reportedly set to end its current fiscal quarter on a high note.

Update: It appears this Model Y was just delivered to a store in Vancouver, but not to an actual customer just yet, according to our source. We regret the error and we have updated our story to reflect the change.

Following some major price drops just 11 days ago, Tesla is already back to tweaking its prices. The company’s entry Model Y Long Range has increased in price by $500 USD on Monday evening to now start at $53,490 USD, up from $52,990 USD. The Performance Model Y remains at $56,990 USD. We’re not seeing […]
Sarah Lee-Jones
5 days ago