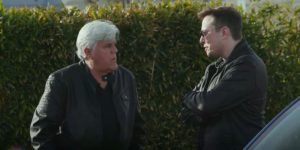 Jay Leno and Elon Musk are at it again. After clips of the two discussing Tesla’s 2021 Cybertruck in a test drive emerged, some new video footage shows even more. Echoing sentiments presented in their original 2008 discussion of the Tesla Roadster, Musk and Leno are now discussing the 2020 Tesla Roadster. A new video over at CNBC shows all.

As one of the original electric vehicles that caught the eye of the public, the Tesla Roadster showed some impressive statistics. The vehicle displayed to the world just how powerful electric vehicles can be. Now, nearly a decade later, Tesla continues its legacy with a new version of its flagship vehicle. In the video, Musk tells Leno that there will be an option to use SpaceX rocket thrusters on the vehicle.

While the information is certainly dazzling, it remains consistent with the earlier statement that Musk made on Twitter in 2018. As he stated, “SpaceX option package for new Tesla Roadster will include ~10 small rocket thrusters arranged seamlessly around car. These rocket engines dramatically improve acceleration, top speed, braking & cornering. Maybe they will even allow a Tesla to fly …”

Without sharing too much, Musk explains that the vehicle will use ultra-high pressure compressed air cold thrusters.  A summary report at Teslarati expounds on what this means for the future of Tesla and electric vehicles as a whole.