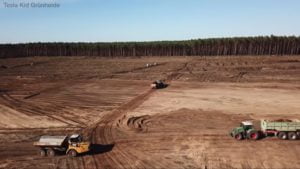 A recent video from Tesla Kid Grünheide shows the current status of Tesla’s progress on its new Berlin Gigafactory. As the project is about one month underway, Tesla enthusiasts are eager to see how the company is moving ahead.

The Berlin Gigafactory marks a major milestone for the electric vehicle manufacturer. The construction of the Berlin Gigafactory constitutes a larger move by Tesla. The company wants to expand out of North America. In fact, they previously limited manufacturing to Fremont, California factories. However, following the expanded production in China with the Shanghai Gigafactory, Europe is the next logical move.

“Advanced progress is in the north area, around the Old Post Street. Levelling/flattening is being done on the pure-sand layer underneath. The large hill/”dump” on the west side, next to the Autobahn, (and not from Tesla) has been ~40% cut away.”

A local environmental agency published a report on the factory. It states that production should begin July 2021.