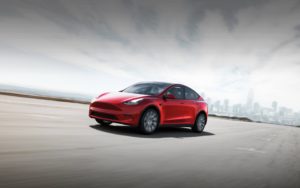 The YouTube account Tesla Backseatballer has just uploaded a video showing off some of the new features of the Tesla Model Y. As you probably know by now, buyers are excited as Model Y deliveries are set to begin in just a few days. While some details such as the Model Y dimensions, weight, and height have leaked, many are curious about some of the finer points of the new Tesla model.

Tesla Backseatballer’s new video titled “Tesla Model Y – Spotted In Toronto Exclusive Exterior” does a great job of showing off some of the meticulous details that went into the Model Y. For one, the video demonstrates the difference in the side-view cameras. In the Model Y, the tinting around the side cameras is much smaller than the tinting found on the Model 3. The design feature assists with glare and lens flares as the camera captures motion.

The video also notes some minor differences between the Model 3 and the Model Y. For example, the trunk lid on the Model Y has a more defined curvature. The Model Y’s front fascia is also quite noticeable.

While many of the details on the Model Y are subtle, they add up to create a look that is sleek and cohesive. Expect to see more updates in the coming weeks as Model Y deliveries roll out.

The Tesla Model Y earned the title of News AU‘s 2022 Car of the Year, following testing of eight different gas and electric vehicles on Australian roads. The outlet notes the Model Y’s 450km driving range, its roomy cabin compared to gas cars, its brisk acceleration and its sharp steering as a few of the […]
Peter McGuthrie
10 hours ago