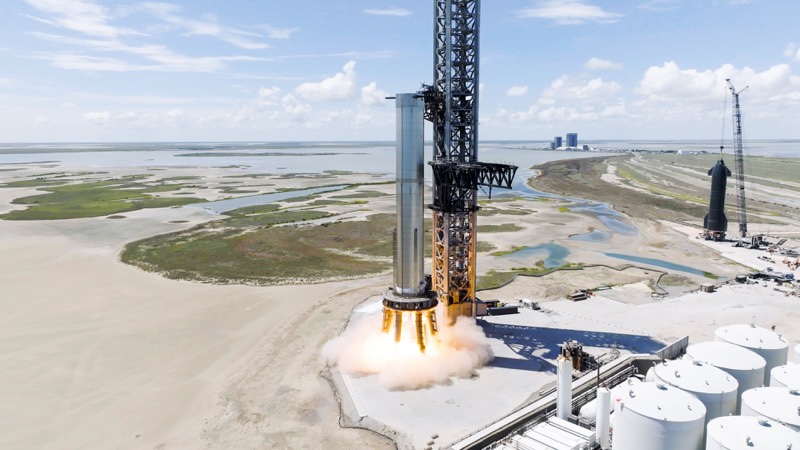 SpaceX today completed a 7-engine static fire test on its Super Heavy Booster 7 on Monday, at Starbase. The compared shared two photos of the static fire on Twitter.

As for when SpaceX will static fire all 33 Raptor engines on its Super Heavy Booster 7, CEO Elon Musk said it will happen “in a few weeks.”

Previously, the company tested a static fire of one Raptor engine on Super Heavy Booster 7. But testing 7 at one time is a new record.

A full stack would see Starship on top of the Super Heavy Booster, while a wet dress rehearsal means a simulation of all stages of a rocket launch but without anything leaving the pad.

Check out a video of the 7-engine static fire below, captured by NASA Spaceflight; Musk replied “Chamber pressure looked good on all 7 engines”:

STATIC FIRE! Booster 7 fires up multiple engines (the target was for seven). Let's see if @elonmusk confirms all seven, (which would be a new record!)

It’s unclear when SpaceX will be able to test the first orbital flight of its Starship rocket system, but it should happen soon, and hopefully before the end of the year or early next.

A new Starlink dish just dropped, this time featuring a wider range of weather capabilities for use in harsh marine conditions. SpaceX released a new Starlink dish for marine customers this week, featuring an overall flatter design and a much higher wind resistance, as can be seen on the company’s website (via @Sawyer Merritt). The […]
Peter McGuthrie
14 hours ago