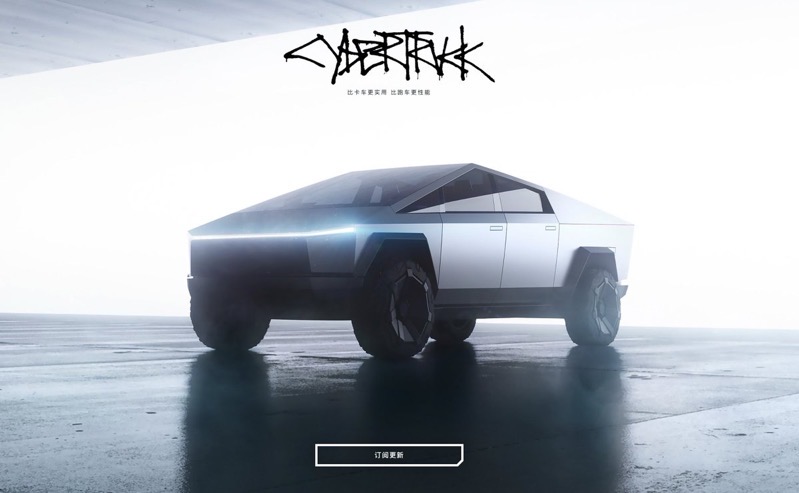 Tesla has stopped taking Cybertruck orders on its websites in China and Europe (via @SawyerMerritt).

The Tesla website now only allows visitors to sign up for Cybertruck updates and orders are no longer possible. For now, it remains possible to place a Cybertruck order in Canada, the U.S. and Mexico.

Tesla does no longer accept orders for the cybertruck in Europe.
The website changed from Bestellen = Order to Get Updates pic.twitter.com/nrB9UoFVKy

Speaking at the Financial Times Future of the Car Conference earlier this week, Tesla CEO Elon Musk said the company may stop taking orders of certain vehicles due to high demand and long wait times.

Musk said, “currently the lead time for ordering a Tesla is ridiculously long. So, our issue is not demand, it is production.”

“But that’s at the moment because of the global supply chains and the chip shortages, that’s less around electric car demand which we are expecting to go absolutely through the roof, and you obviously have very ambitious targets for that and Tesla,” replied interviewer Peter Campbell.

“Yeah, um, even before there was the supply chain issues Tesla demand exceeded production. So, now its demand is exceeding production to a ridiculous degree. We’re actually gonna limit, or just stop taking orders for anything beyond a certain period of time because some of the timing is like a year away,” said Musk.

During Tesla’s Q1 earnings call, Musk said the company was “on track to reach volume production of Cybertruck in 2023.” The simplicity of the Cybertruck structure is advantageous versus a traditional truck, as it will have 20-30% fewer parts, added the company.

Tesla reported record Q4 2022 earnings today and the automaker also provided an update on its upcoming Cybertruck. According to Tesla, it says “Cybertruck remains on track to begin production later this year at Gigafactory Texas. Our next generation vehicle platform is under development, with additional details to be shared at Investor Day (March 1st, […]
Sarah Lee-Jones
17 hours ago

Tesla appears to have received die casting molds for its upcoming Cybertruck, with parts arriving at its Gigafactory in Austin, Texas. That’s according to bill of lading discovered by Greg (@greggertruck), showing a container from ZDM (Zhenzhi) Machinery & Mould Co. that arrived at Giga Texas on January 16, 2023. The bill notes a description […]
Sarah Lee-Jones
7 days ago