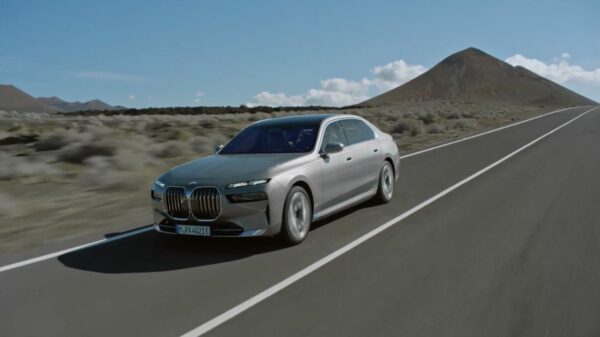 BMW will unveil the electric i7 xDrive60 in U.S. markets, with the launch expected to take place in Q4 of this year, according to a press release shared on Wednesday.

The 2023 BMW i7 xDrive60 is estimated to have around 300 miles according to tests conducted by the automaker. It’s the electric version of its 7-series sedan.

Pre-orders for the electric i7 also opened on Wednesday, and they simply require a $1,500 USD deposit with details contained on BMW’s website.

The exterior features a new front end of the i7 body, which BMW says previews the “new design language of luxury BMW models,” which is also expected to be conveyed by vehicles yet to be unveiled.

On the interior, the electric i7 will also include a 31-inch BMW theater screen that comes with Amazon Fire TV and an 8K resolution display.

Buyers also have the option to add on the optional highway assistant, which offers hands-free driving up to 80 mph.

Check out some early hands-on videos of the BMW i7 below:

BMW announced earlier this year plans to double its all-electric deliveries to 200,000 in 2022.

Stellantis announced plans to debut Level 3 self-driving with BMW’s vehicles by 2024, meaning that it will introduce hands-free automated driving.