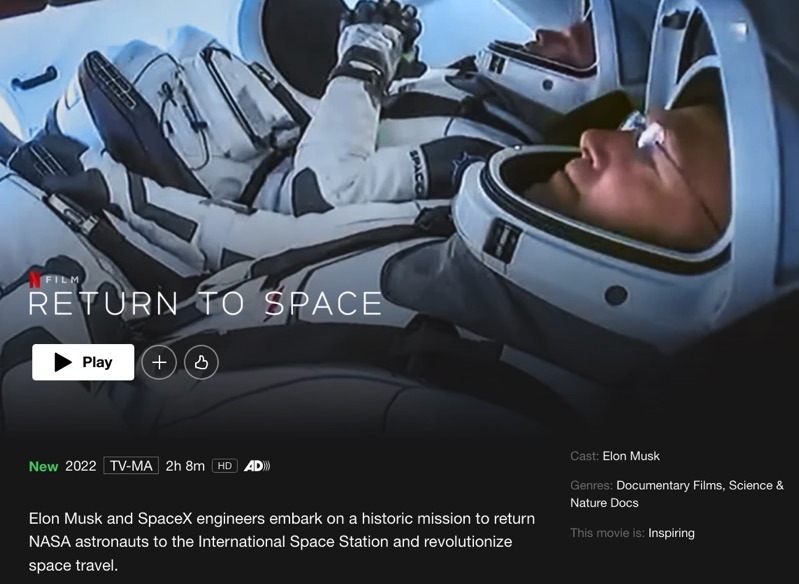 Netflix has launched its latest documentary for streaming, titled ‘Return to Space’, which features Elon Musk’s SpaceX, and the latter’s launch of NASA astronauts to the International Space Station aboard a private spacecraft for the first time.

“Offering rare inside access to NASA and SpaceX, this is the thrilling story of the nearly 20 year journey to send American astronauts back to space aboard U.S. rockets, from Oscar-winning filmmakers Chai Vasarhelyi and Jimmy Chin (Free Solo, The Rescue),” explains the Netflix synopsis.

The documentary covers the NASA and SpaceX mission that sent NASA astronauts Doug Hurley and Bob Behnken to the International Space Station, aboard Crew Dragon in the Demo-2 test flight, back in May 2020. The crew was launched to orbit by SpaceX’s reusable rocket, the Falcon 9.

This mission was the first crewed mission for SpaceX and also marked the first time in nearly 10 years the U.S. sent astronauts to space from home soil, instead of relying on Russian rockets.

Netflix previously aired another SpaceX documentary, Countdown: Inspiration4 Mission to Space, which sent civilians into space aboard Crew Dragon for the first time, ever.

On Friday, April 8, SpaceX is set to launch the Ax-1 mission to the Space Station, the first all-private human crew being sent to the International Space Station. The Falcon 9 launch is set for 7:55am EDT.

All systems are looking good for tomorrow’s Falcon 9 launch of the @Axiom_Space Ax-1 mission to the @space_station; teams are keeping an eye on downrange weather along the ascent corridor. Webcast will go live at ~7:55 a.m. ET → https://t.co/N3MHSxCS0k pic.twitter.com/Tb76kDRQRz