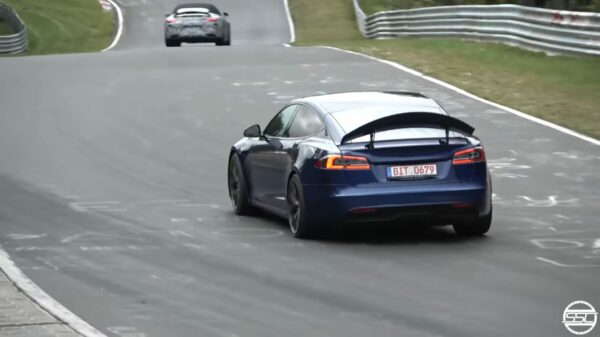 Last month, the Tesla Model S Plaid landed a record lap driven at the German Nüburgring raceway, and last week, a new prototype build of the electric vehicle (EV) was spotted at the raceway again, alongside several other luxury sports vehicles.

YouTube channel statesidesupercars shared a new video on Friday, depicting the Nüburgring, Germany raceway being taken down by prototype versions of a Model S Plaid, a Porsche 959 and a Mercedes-Benz AMG One Etc, among a number of other vehicles.

The footage comes from the Brunnchen 2 section of Nürburgring and features a number of cars attempting the area on the famous track.

You can watch the full video, complete with footage of a Porsche 959 and an AMG One Etc, as well as the Tesla Model S Plaid which appears at roughly the 3:00-minute mark.