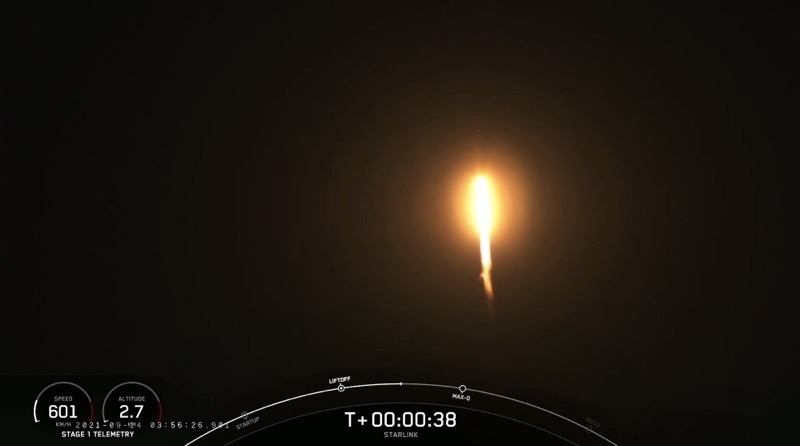 Starlink on Monday evening launched its first west coast Starlink satellite mission, with its Falcon 9 rocket sending the 16th Starlink mission of the year, and 32nd to date overall, into orbit.

Check out the launch below of Falcon 9 from Space Launch Complex 4E, from Vandenberg Space Force Base in California. This is booster core B1049-10:

While the video cut off, near the end, Falcon 9 successfully landed on the autonomous drone ship Of Course I Still Love You in the Pacific Ocean.

SpaceX is sending a payload of 51 Starlink version 2 satellites, which utilize space lasers to communicate with each satellite, no longer needing communications with ground stations. The company says all future satellites will feature optical space lasers.

Today’s launch from Vandenburg allows Starlink satellites to reach polar regions such as Alaska and Scandinavia.

Currently, the second stage is still making its way to its deployment destination before releasing all Starlink satellites, which will then make their way to final destinations.

Starlink says there are currently over 500,000 pre-orders so far and 100,000 Starlink terminals have shipped.

SpaceX just confirmed the satellites have deployed successfully and will now make their way with onboard ion thrusters to make their way to operational orbits. Go SpaceX!

Starlink internet beta is now available in 18 areas around the globe:

Check out the replay below:

A new Starlink dish just dropped, this time featuring a wider range of weather capabilities for use in harsh marine conditions. SpaceX released a new Starlink dish for marine customers this week, featuring an overall flatter design and a much higher wind resistance, as can be seen on the company’s website (via @Sawyer Merritt). The […]
Peter McGuthrie
16 hours ago